She added that she will continue to speak her mind.

"I'm always an optimist. But sometimes, I think we have to make our stance very clear. I did not mean any harm certainly. Insyallah (God willing), I will continue to speak in favour of what is right and what is important," the Permatang Pauh MP said.

The daughter of Parti Keadilan Rakyat (PKR) president Anwar Ibrahim was speaking to reporters during a press conference at the Parliament lobby on Tuesday (March 26).

Ms Nurul Izzah caused a stir after she told Singapore's The Straits Times in an interview that she was "broken-hearted" having to work with Tun Mahathir once again, adding that he was a "former dictator who wreaked so much damage".

According to Ms Nurul Izzah, her dismissal of Dr Mahathir as a dictator to ST was a repetition of what she had said many years ago, even before the 14th general election.

"I've said it before the elections, I have said it during Bersih 2.0's demonstrations. I don't understand why saying it at a different (platform), but with the same message, is problematic," she said.

"I think time and again, I have always said that. There's nothing new. Whether foreign or local media, my priority is for Malaysians as a legislator. Of course, national interests override everything else."

At the same time, Ms Nurul Izzah said she remains committed to carrying out the reforms that the Pakatan Harapan coalition pledged for Malaysia, among which were her initiatives in reforming the prison system.

"Reform can be seen through many ways, I have spoken publicly about the prison reform that Malaysia needs to defend the vulnerable.

"Insyallah, when I speak to the Singapore media, I will make sure that I stick to the script, that's the best way rather than sharing my innermost sentiments," she said, sarcastically.

During the interview with ST, Ms Nurul Izzah was also quoted as saying that she would be serving her final term as an MP due to her disappointment with the current Pakatan Harapan government's performance.

Asked to comment over her plans to quit as an MP, Ms Nurul Izzah merely said "let's cross the bridge when we come to it". 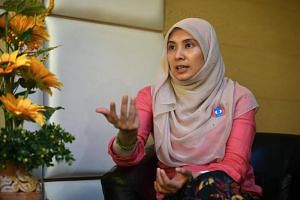 "I want to contribute in any way I can. That is the reason why I contested in the first place."

Without mincing her words, Ms Nurul Izzah also said that the reforms taking place were at a "sluggish pace".

"It is wrong for me to say that? Is that wrong? I think it's okay for a citizen to say. Anyone can comment on the pace of reforms and, Insyallah, we will work towards it together," she said.

Ms Nurul Izzah had drawn flak for her remarks, with Dr Mahathir's aide labelling her as immature, irrational and emotional in understanding the prime minister's stand and the government.

Even her party colleagues Datuk Seri Mohamed Azmin Ali and N. Surendran had attacked her publicly over the disparaging remarks.

Meanwhile, Datuk Seri Anwar has told his daughter Ms Nurul Izzah that there will always be challenges and disappointments in her path.

"Izzah is my eldest child and as a father, her happiness and well-being comes first. However, as a father, I am also obligated to advise my children that they will always face challenges and disappointments in any path they choose," the Port Dickson MP said in an Instagram post on Tuesday.

"The hardships and hurt my family went through for the past twenty years have left their mark. Izzah herself was thrust into the limelight and has spent most of her adult life fighting to help reform the nation."

Mr Anwar had posted a black and white picture of him and Ms Nurul Izzah.

She also had announced in December last year that she would quit all PKR party posts while remaining as a parliamentary backbencher committed to reforms.