KUALA LUMPUR  - Malaysian politician Nurul Izzah Anwar quit her posts in Parti Keadilan Rakyat (PKR) on Monday (Dec 17) , a shocking move that has raised questions about internal party strife and whether defecting opposition MPs would be welcomed into ruling coalition Pakatan Harapan, of which PKR is a member.

The scion of prime minister-in-waiting and PKR president Anwar Ibrahim and Deputy Prime Minister Wan Azizah Wan Ismail, was formerly one of four elected PKR vice-presidents, and the party’s state chief in Penang.

“I am resigning as vice-president of the People’s Justice Party, and relinquish my appointment as the Chair of Keadilan Penang,” Ms Nurul Izzah said in a statement, using the English name of PKR. “I will also no longer serve the federal government in any capacity”.

The three-term MP, who currently represents Permatang Pauh in Penang, did not explain why she was resigning but said she would continue to serve as an MP and as a member of the parliamentary backbench.

“There are beliefs and ideals I hold dear and I feel that I can be most true to them by taking this course of action I am now announcing,” she said. “My only regret is that I should have made this announcement sooner, but it has not been an easy decision to arrive at”.

Dubbed “puteri reformasi” (princess of reform) after campaigning for her father’s release from prison two decades ago, Ms Nurul Izzah, 38, first stood for election in 2008 and has since risen through the party ranks.

But not everyone within PKR has been happy with her political ascent.

“The appointment of Nurul Izzah... as Penang state chief by the party president who is her father, is highly inappropriate and open to the charge of nepotism,” said Mr Anwar’s lawyer Latheefa Koya, a PKR member on Monday, ahead of Ms Nurul Izzah’s announcement. “It is needless to say that the practice of appointing close relatives to important positions should have no place in a reformist party”.

Meanwhile, Ms Nurul Izzah was visibly distraught at the party convention in November, after a fractious and occasionally violent internal election that pitted Economic Affairs Minister Azmin Ali against Mr Rafizi Ramli, who is widely known to have the support of Ms Nurul Izzah and Datuk Seri Anwar.

“Of course anyone would be distraught. People should be focusing on strengthening our party, I don’t like to see us having gone through such a difficult and arduous process, which is flawed,” she told reporters then.

Her colleagues from the PH coalition appeared surprised by her resignation.

PKR deputy president Azmin could not offer explanation on Ms Nurul Izzah’s decision, saying, “I will try to talk to her and understand what really happened”.

Meanwhile Mr Rafizi tweeted: “She is not withdrawing from politics. I read it as a decision to retain the idealism of the struggle amid the political chaos”.

Ms Nurul Izzah’s decision comes a day after she reacted negatively to a question about recent party-hopping attempts by Umno politicians, who have left the former ruling party en masse to defect to PH parties.

“Betrayal of mandate given the 9th of May, insults those who are loyal to the cause,” she wrote, referring to the date of the recent general election which PH won. “There is no meaning to democracy if Malaysia is governed by elite based politicking”.

Despite being seen as a stand-in for her father when she first contested in 2008, Ms Nurul Izzah has emerged from her parents’ shadows to become a respected and well-liked politician.

However she has taken a step back since PH’s historic win at the polls in May this year, some say for her father to take centre-stage.

Below is her full statement:

The 9th of May has been a watershed for many reasons. A peaceful transition at federal power took place, and Malaysians saw the enlargement of their democratic space for reforms to be initiated.

To what end will come of the successful completion of the promised reform agenda by Pakatan Harapan remains to be seen - as such, it remains crucial that all stakeholders continue pressing for the fulfilment of the reforms, as well as the continuation of policies and programs of the previous government if proven to be beneficial for the rakyat.

My journey in politics began in 1998 - more as a political awakening, and eventually as part of the central leadership of the People's Justice Party. I thank the members of KEADILAN for according me the opportunity to serve them all this while.

There are beliefs and ideals I hold dear and I feel that I can be most true to them by taking this course of action I am now announcing.

I am resigning as Vice-President of the People's Justice Party, and relinquish my appointment as the Chair of KEADILAN Penang. The leadership has been informed of my decision. 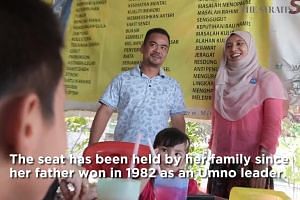 My work as elected representative for the people of Permatang Pauh and as a legislator will continue until my term expires. I will also remain as an ordinary member of KEADILAN.

I will also no longer serve the federal government in any capacity. I leave the decision as to my role in the Penang state level government linked companies to the party leadership.

I remain a member of the parliamentary backbench committed to reforms. I also leave to the leadership the decision as to my status as a member of the Public Accounts Committee (PAC). I had earlier relinquished my post as Chair of the Bills Committee in favour of the PAC.

But I will continue my advocacy work as an ordinary citizen and Member of Parliament for Permatang Pauh.

My only regret is that I should have made this announcement sooner, but it has not been an easy decision to arrive at. The pace of political developments has been relentless for the last nine months, with party elections following a gruelling general election campaign.

Now that I have had the chance to take stock of where I stand in relations to politics, I am resolved to doing the right thing.

I wish the leadership and the party the very best.