ALOR SETAR - Prime Minister Mahathir Mohamad says he is "disappointed" that prominent lawmaker Nurul Izzah Anwar said she was dissatisfied with his government and "heartbroken" at having to work with him in an interview with The Straits Times.

"Never mind, many people are disappointed. I am also disappointed with them," Dr Mahathir said at a civil service event on Monday (March 25), The Star reported.

Tun Dr Mahathir did not elaborate. He was responding to a question from a reporter on the interview. Ms Nurul Izzah, the daughter of his successor-in-waiting Anwar Ibrahim, had told ST that she was "broken-hearted" at having to once again work with "dictator" Dr Mahathir.

She said she would step down as a federal lawmaker after serving her current term, citing a loss of faith in the Pakatan Harapan government led by Dr Mahathir.

She also said it was difficult working with Dr Mahathir because of strained personal ties stemming from Mr Anwar's imprisonment in 1998, after he was sacked as deputy prime minister by then Prime Minister Mahathir.

He said she should not have made negative comments on Dr Mahathir, especially with Singapore media. 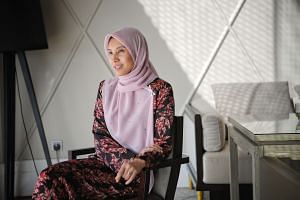 "What is being done by the prime minister and the government currently should not be seen in a personal context by Nurul Izzah, but must be seen as a whole in the interest of the people and nation," Mr Abu Bakar said in a statement.

"As a Member of Parliament and former PKR vice-president, I am certain that Nurul Izzah does not forget that the position of Dr Mahathir as the prime minister is a unanimous decision of the Pakatan Harapan (PH) leadership council, while all decisions involving the government administration is decided jointly by the Cabinet ministers," he added.

"I also believe that Nurul Izzah understands and acknowledges that without YAB Tun, it was impossible for PH to win in the 14th general election and form the government that exists today."