In throwing out the suit by Musa, Justice Yew Jen Kie ruled that Datuk Seri Shafie’s appointment as chief minister on May 12 by state governor Juhar Mahiruddin was constitutional. Musa had deemed his dismissal illegal as he had not resigned when Mr Shafie was sworn in on May 12.

The High Court decision was the second blow in three days for the former Sabah Barisan Nasional chairman, who has been charged with receiving millions of dollars in bribes. He pleaded not guilty.

Musa was sworn in on May 10 after Sabah BN won 29 seats in the 60-seat legislative assembly. Mr Shafie’s Warisan, together with two Pakatan Harapan component parties, also won 29 seats.

Musa filed a suit against Mr Juhar and Mr Shafie on May 17, which sought a declaration that he is the lawful Sabah chief minister, before withdrawing it and filing a fresh originating summons with the same grounds on June 6. 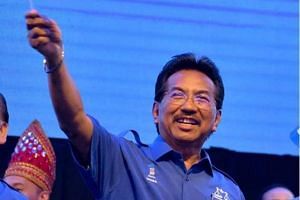 Yesterday, the court also ordered Musa to pay RM15,000 (S$4,930) in costs each to Mr Shafie and Mr Juhar.Musa said he would appeal against the High Court decision as the “issue goes beyond whether I am chief minister or not”.

“This is about the sanctity and proper interpretation of Sabah’s Constitution and the Tuan Yang Di-Pertua’s powers to appoint and dismiss a chief minister,” he said in a statement. Musa was Sabah chief minister for 15 years until May this year.

On Monday, the Sungai Sibuga assemblyman was charged with 35 counts of receiving bribes totalling US$63 million (S$87 million) in exchange for logging contracts.

According to the charge sheets, the 67-year-old allegedly received the sum between Dec 20, 2004, and Nov 6, 2008, via proxies in Hong Kong and  Singapore, as an inducement for awarding timber concessions in the state.

He was granted bail of RM2 million (S$660,000) in two sureties and ordered to surrender both his civil and diplomatic passports. He posted the full bail yesterday to enable him to fly to Kota Kinabalu.