BANGKOK (REUTERS) - Thailand's first general election since a 2014 army coup has been touted by the ruling military junta as a return to democratic rule, but two weeks after the vote, results are still unclear and allegations of manipulation are mounting.

Since the March 24 vote, figures linked to a "democratic front" of opposition parties say they have come under increasing pressure from police and the military.

The Election Commission has also indicated it would use a complex allocation formula for 150 "party seats" in the House of Representatives in a way that would likely dilute the opposition alliance's seats in the 500-seat lower house.

The Election Commission has said it won't announce even provisional winners of the 150 party seats until May 9, saying it needs time to order by-elections and vote recounts as well as to disqualify candidates who broke election laws.

But critics say the time gap allows the military-royalist establishment to manipulate results and disqualify opponents of the pro-army Palang Pracharath party that seeks to keep junta leader Prayut Chan-o-cha in power as an elected prime minister.

The leading opposition Pheu Thai party, made up of loyalists to army-ousted prime minister Thaksin Shinawatra, sees the delays and legal actions as an attempt to deny the "democratic front" enough seats in the House needed to block the main junta-linked party from unrestrained lawmaking power.

"After the election... the majority of the people feels a sense of hopelessness and distrust for the election process,"said Pheu Thai secretary-general Phumtham Wechayachai. 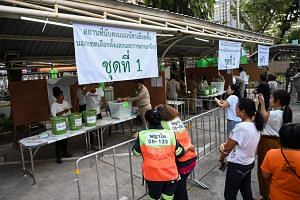 Thailand's election outcome is uncertain, but not its economic challenges

"People are talking about the Election Commission's part in supporting the extension of power by the National Council for Peace and Order," he said, using the junta's formal name.

"The election commission is neutral and adheres to the law. We don't take sides or help one particular party," Mr Jaroongwit said.

Palang Pracharath said it does not gain any advantages over opposition parties.

"It's completely false to say that the election commission is helping Palang Pracharath. This is an attempt to discredit us," the party's deputy spokesman Thanakorn Wangboonkongchana told Reuters.

However, opposition figures say they are being targeted.

Thanathorn Juangroongruangkit, the leader of the youth-oriented Future Forward Party which did surprisingly well in the vote, was charged last Saturday (April 6) with sedition on a junta complaint dating back to 2015 - a case that could see his party disbanded.

Online campaigns have also cast Thanathorn as anti-monarchy, a serious crime in Thailand, where the monarchy is revered without question.

Thanathorn denies being against the monarchy and all charges against him.

"It's the establishment's desire to stir hatred, fear, and mistrust among the people, creating legitimacy for the military to take over and stay on," he said last week.

Mr Winthai Suvaree, a spokesman for the junta, said the charges against Thanathorn were not aimed at weakening the opposition and were "entirely unrelated to current political events".

The rules of the election were written in the 2017 junta-backed Constitution, which critics said were aimed at ensuring military influence in Thai politics.

Among the new provisions is that the Senate, the 250-seat Upper House of Parliament appointed by the junta, must approve the prime minister in a combined vote with the House, which previously solely voted on the premier.

That means the junta-backed party and its allies have to gain only 126 seats in the House to install Prayut as prime minister, while the opposition would need 376 votes for their potential candidate.

Still, days after the March 24 vote, the "democratic front" claimed through its own calculations that it would gain at least 255 House seats - not enough to form a government but potentially allowing it to block the military-backed party from having free rein.

Last week, however, the election commission indicated the complex formula to calculate allocation of the 150 "party list" seats will round up decimals to give seats to 11 small parties although their popular votes did not meet a previously described threshold required to earn even one seat.

"This is an irregularity that reflects an effort to block the democratic front from forming the next government," said Pheu Thai spokesman Ladawan Wongsriwong.

Widening the list would cut seats from top popular vote getters and could reduce seats for Future Forward from around 87 to 80, potentially hurting the democratic front's claim of House majority. 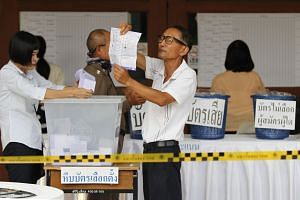 Messy days ahead as Thai factions jostle to lead next government

"It's an abnormal election from the outset. It's a game where the junta wrote the rules and appointed the referee, who is also acting abnormally," said Yingcheep Atchanont, project manager at legal-monitoring group iLaw.

Palang Pracharath has repeatedly said it reaps no benefits from the constitution.

Mr Sonthirat Sontijirawong, the Palang Pracharath secretary-general, has said the party would begin talks to form the next government only after the king's official coronation on May 4-6.

The election comes after nearly 15 years of turmoil, during which conflicts between supporters of ousted former premier Thaksin and his establishment opponents manifested in street protests, violent clashes, and two military coups.

On the eve of the vote, King Maha Vajiralongkorn made an unexpected statement, recalling a comment made by his late father on the need to put "good people" in power and to prevent "bad people from... creating chaos".

Six days later, the king revoked royal decorations that had been awarded to Thaksin, citing his 2008 corruption conviction and for fleeing the country to escape prison.

The military also stripped Thaksin of a pre-cadet school's achievement award as well as deleting his name from the school's hall of fame.

"Thaksin continues to be a threat to the position of power of the establishment," Associate Professor Pavin Chachavalpongpun, at Kyoto University's Centre for South-east Asian Studies, told Reuters.