JAKARTA - Indonesia is on edge following plans by an Islamist group to hold a two-day rally at the elections commission (KPU) on Tuesday (May 21), to protest the impending results of last month's presidential polls.

The call for Muslims to throng the streets around the KPU headquarters in downtown Jakarta has been circulating on social media at the weekend - just before Wednesday's deadline for the official vote count to be completed.

The rally organisers, who identified themselves as Persaudaraan Alumni 212, are calling the mass gathering a "constitutional Jihad", according to publicity material seen by The Straits Times on Sunday (May 19).

The name Persaudaraan Alumni 212 refers to people who took part in a rally held in the capital more than two years ago on Dec 2, against former Jakarta governor Basuki Tjahaja Purnama for insulting Islam.

The 2016 protest, led by far-right Muslims from the Islamic Defenders Front, better known locally as the FPI, had threatened to destabilise the country during the gubernatorial election, which was marred by religiosity and sectarianism.

Reports of the rally this week raised similar fears among many in the city, prompting foreign missions such as the United States embassy to issue a warning of "heightened risk of terrorism" and mass demonstrations in Jakarta, as well as other cities in Indonesia, such as Surabaya and Medan.

The security alerts also comes after Indonesian police warned of possible attacks by terrorists targeting mass gatherings of people and security forces during the public rallies outside the KPU building. 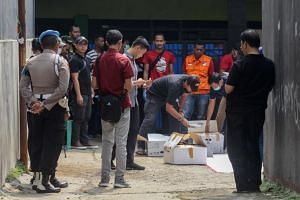 US embassy issues Indonesia security alert ahead of election results

The police said around 30 terror suspects have been arrested by counter-terrorism police from across the country in connection with a plot to strike at the elections commission on Wednesday.

Several improvised explosive devices, as well as other bomb-making material have been seized from the suspects during the police raids.

Police also said more than 32,000 troops, including hundreds supplemented from other provinces, have been mobilised to secure the city.

FPI leader Rizieq Shihab, who is in self-exile in Saudi Arabia to avoid police questioning in connection with a pornography case, is seen on the publicity material for the upcoming rally, flanked by presidential hopeful Prabowo Subianto and his running mate Sandiaga Uno.

The photos of the two candidates appear to have been taken from their official campaign documents, with the hardline Muslim cleric digitally added between them.

Mr Prabowo, who ran against incumbent Joko Widodo, is expected to lose the April 17 presidential race by 11 percentage points, according to Sunday's tally of almost 90 per cent of the votes by the KPU.

The former general, however, has been adamant that he will not accept the results after making repeated allegations of electoral fraud.

He has claimed that he and Mr Sandiaga had lost votes due to the millions of fictitious names added to voter rolls, the exploitation of state apparatus, money politics, precast ballots and data entry errors by the KPU. 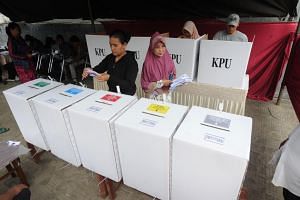 Indonesia's General Elections Commission to keep on counting despite errors

It is unclear how Mr Prabowo or his campaign team will respond to the election results on Wednesday, although a close aide has said the former general has no plans to contest the KPU tally in court as he did when he first lost to Mr Joko at the 2014 election, because it would be a "waste of time".

A campaign official, however, has denied reports in local media saying that Mr Prabowo will lead the Persaudaraan Alumni 212 protest this week.

"It is not true," Mr Ferry Juliantono, a spokesman for the Prabowo-Sandiaga campaign committee, told Tempo news on Saturday.

The long election period, which started as early as August last year with the nomination of candidates for the polls, is set to come to an end later this month.

KPU chairman Arief Budiman has confirmed that the elections commission will finalise the vote count by Wednesday, and declare the winner of the presidential race no later than May 28.

But he said this will only be possible if there are no legal challenges filed against the election results at the Constitutional Court within three days of its release by the KPU.

"So if the votes are disputed, we will have to wait until the dispute process is complete," he added.