JAKARTA (AFP) - Massive forest fires in Indonesia that have caused a toxic haze to spread as far as Singapore and peninsular Malaysia are also seriously affecting endangered orang utans and their habitat, a rescue foundation said on Tuesday (Sept 17).

Jakarta has deployed thousands of troops as temporary firemen and deployed dozens of water-bombing aircraft to battle blazes that are turning pristine forest into a charred landscape in Sumatra and Borneo islands.

The fires - usually started by illegal burning to clear land for farming - have unleashed a choking haze across parts of South-east Asia.

The Borneo Orangutan Survival Foundation said on Tuesday that the haze was affecting hundreds of great apes in its care at rescue centres and wildlife re-introduction shelters.

"The thick smoke does not only endanger the health of our staff... but also it affects the 355 orang utans we currently care for," the foundation said in a statement, referring to just one centre in Kalimantan.

"As many as 37 young orang utans are suspected to have contracted a mild respiratory infection," it added.

Conditions were so bad at its Samboja Lestari facility in East Kalimantan that outdoor activities for the animals had been restricted to a few hours a day.

Orang utans have been particularly vulnerable to commercial land clearances and have seen their natural habitat shrink dramatically in the last few decades.

The population of orang utans in Borneo has plummeted from about 288,500 in 1973 to about 100,000 today, according to the International Union for Conservation of Nature. 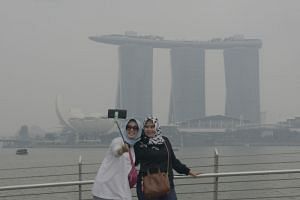 The toxic smoke caused by the forest fires is an annual problem for Indonesia and its neighbours, but has been worsened this year by particularly dry weather.

On Borneo island, which Indonesia shares with Malaysia and Brunei, pollution levels were "hazardous", according to environment ministry data.

Hundreds of schools across Indonesia and Malaysia were shut.