JAKARTA (BLOOMBERG) - Indonesian President Joko Widodo has ordered a crackdown against individuals and companies responsible for forest fires that have caused a dangerous haze in parts of South-east Asia, disrupting air travel and forcing the closure of schools.

Jokowi, as Mr Joko is commonly known, held a limited Cabinet meeting in Pekanbaru in Riau, one of the worst affected areas, late on Monday (Sept 16) to review steps to fight the fires, his office said in a statement.

The President directed the disaster mitigation agency to expand the scope of artificial rain and add more troops and firefighters.

Stinging smoke from illegal burning to clear land for palm oil and paper plantations has covered western and central regions of Indonesia and parts of Malaysia, with thousands of people reporting acute respiratory illness.

The raging hot spots have revived fears of a repeat of 2015, when a total of 2.6 million hectares of land was affected, costing Indonesia 221 trillion rupiah (S$21.61 billion) in economic losses.

The total number of hot spots in Indonesia rose to 2,984 on Tuesday from 2,583 on Monday, with the Indonesian part of the Borneo island accounting for almost 1,000 fires.

The hot spots have affected 328,724 hectares of forest and farm land this year, data from the National Disaster Mitigation Agency shows.

The weather is forecast to remain dry in the southern Asean region and the prevailing winds are expected to continue blowing from the south-east or south-west in the next few days. 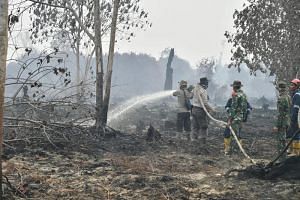 Hot spots in Sumatra and Kalimantan are expected to persist with the dry weather, while hazy conditions in the region look set to remain, the Asean Specialised Meteorological Centre said in a statement.

The Malaysian state of Selangor, near Kuala Lumpur, closed 145 schools on Tuesday, affecting 187,928 students when air pollution reached "unhealthy" and "very unhealthy" ranges, according to a statement from the state's education department.

On Sunday, schools in Pekanbaru, the main city in Riau, were ordered to be closed through Tuesday as a thick smog cover engulfed the city, Tempo reported.

Kuching and Kuala Lumpur in Malaysia, Hanoi and Jakarta were among the world's top cities with the poorest air quality, according to IQAir AirVisual pollution data.

The air quality index in Kuching in haze-hit Sarawak state was 220 on Tuesday, a level deemed very unhealthy, while it was at 157 in Kuala Lumpur, an unhealthy level for sensitive groups.

The haze blanketing western parts of Indonesia continues to cause air traffic disruptions.

Lion Air on Monday diverted all flights to and from Samarinda airport in East Kalimantan to Balikpapan as the haze reduced visibility, the Indonesian carrier said in an e-mailed statement.

A total of 11 airports were affected on Monday, with 10 flights cancelled and 50 flights delayed and few others diverted, according to Airnav.

PT Garuda Indonesia, the national carrier, said it will cancel 15 flights through Sept 19.

The authorities distributed masks to people in Riau, Jambi, South Sumatra and Kalimantan.

More than 9,000 personnel drawn from the military, police and disaster mitigation agency with the help of 42 helicopters are involved in fighting the fire, official data showed on Monday.

Malaysia plans to carry out cloud seeding in the worst-affected regions, the Star newspaper reported on Sunday.

The air quality in Singapore, which slipped to unhealthy levels on Saturday, is forecast to improve, according to the National Environment Agency. 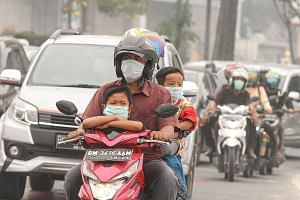 Indonesian authorities will conclude an environmental study on the location for new capital identified by President Joko in East Kalimantan, the environment ministry said on Monday.

While the province is largely free from hot spots, haze from fires raging in other parts of Borneo can affect the new capital, Ms Laksmi Wijayanti, inspector-general at the ministry, told reporters.

Environment ministers from Malaysia and Indonesia have traded blame on the haze situation, with Kuala Lumpur offering help to put out the forest fires.

Singapore's Ministry of the Environment and Water Resources said the country has offered technical firefighting assistance to Indonesia and is prepared to deploy them if requested.