JAKARTA (BLOOMBERG) - Indonesian President Joko Widodo has put the economy at the centre of his pitch to voters, pointing to job creation and boosting purchasing power as key to alleviating poverty for scores of Indonesians.

In a speech on Sunday (Feb 24), the President, known as Jokowi, underscored progress made in infrastructure during his first term as he sought to build momentum ahead of April 17 elections. He also outlined key policy objectives should he win, focusing on a positive theme of taking Indonesia forward.

"I am optimistic that hard work will transform the lives of the Indonesian people," Mr Joko said in Bogor, near the capital Jakarta. "We will continue to reduce poverty through the creation of employment, economy, stronger purchasing power, comprehensive social security," he said.

While polls show Mr Joko holding a commanding lead of about 20 points over his presidential rival, the former general Prabowo Subianto, the gap has narrowed.

Mr Prabowo has campaigned aggressively and some suggest he could spring a "Mahathir-like" upset and follow Malaysia's Prime Minister Mahathir Mohamad in winning an unlikely victory.

The opposition has sharpened its attack on Mr Joko's economic performance in recent weeks, seizing on a ballooning trade deficit and surging public debt.

Mr Joko put development of the vast Indonesian archipelago at the heart of his first term, with hundreds of billions of dollars since spent on an ambitious infrastructure programme. 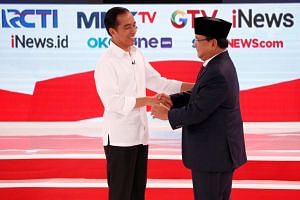 Could President Joko be facing a 'Mahathir-like' upset in Indonesian election?

On Sunday, he called for the country to work together to "build an advanced Indonesia" while adding that "our work is not finished".

He also called for unity, a common message in his first term which has been marked by demonstrations in the capital led by hard-line Muslim groups, a string of terror attacks and devastating natural disasters.

"We need to unite now to face the threat of division and setbacks," he said.

Appealing to the tens of millions of lower-paid Indonesians, Mr Joko flagged the expansion of a scheme of free food cards as a key policy. He also highlighted the so-called village fund programme that helps local governments finance development projects, promising to boost funding to 400 trillion rupiah (S$38.5 billion) over the next five years.

Mr Joko has made inroads into addressing poverty, with the number of so-called "poor people" falling by about two million to 25.7 million since he took office, according to official figures as of September last year.

While the economy has struggled to fire under Mr Joko, the nation's jobless rate fell to near a 20-year low, at 5.3 per cent. He has also managed to keep a lid on cost of living pressures as the election approaches, with inflation easing in January to 2.8 per cent, its lowest level since August 2016.