JAKARTA (BLOOMBERG) - Mr Prabowo Subianto could pull off a "Mahathir-like" surprise win in Indonesia's presidential election in April, according to a former member of President Joko Widodo's Cabinet.

Mr Joko's double-digit lead in opinion polls masks growing unrest among farmers hurt by low commodity prices and a middle class disappointed by the President's failure to deliver on the promise of 7 per cent economic growth, said Mr Rizal Ramli, a former ally of Mr Joko, who is popularly known as Jokowi.

Mr Ramli served as his coordinating minister for maritime affairs between August 2015 and July 2016.

A large number of Muslims may also vote against Mr Joko because top religious figures have been targeted for criticising the government, said Mr Ramli, now an outspoken critic of the President's economic policies.

Mr Joko had previously faced protests from hardline Islamic groups in the Muslim-majority nation for his crackdown on terrorist groups and ban on Hizbut Tahrir, a group that supported a Muslim caliphate.

The Prime Minister of neighbouring Malaysia, Dr Mahathir Mohamad, pulled off a surprise victory in May - more than 14 years after he had stepped down from the role.

The nonagenarian rode a wave of opposition against his embattled predecessor, Najib Razak, who is facing corruption charges related to state fund 1MDB.

A similar tide could now be building against Indonesia's incumbent, Mr Ramli said, with "a desire for change gaining momentum in the past month or so as people are tired of Jokowi".

An Indikator Politik Indonesia survey released on Jan 8 indicated Mr Prabowo may be narrowing the gap, showing his electability rising to nearly 35 per cent in January, up from 30 per cent a month earlier. 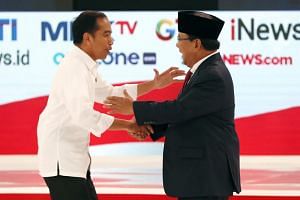 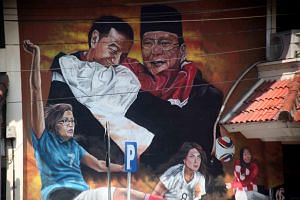 Indonesia's millennials could be key to election, if they vote

Mr Prabowo is seeking to unseat Mr Joko by targeting an Achilles heel: a stagnant economy and policies that have fuelled surging public debt, wider trade deficits and an increase in imports of commodities like sugar, rice and corn.

Mr Prabowo has promised to slash company and individual tax rates in a bid to rejuvenate South-east Asia's largest economy.

He pledged to deliver on support programmes for the poor, including wage raises for civil servants and police officers. And he's said he would reverse an unpopular Joko policy abolishing subsidies on RON88 gasoline.

Mr Ramli said he sees Mr Prabowo "riding the wave of a desire for change because of what Jokowi has done on the economic front, and because of the injustice in terms of law against some Muslims".

Though Mr Prabowo and running mate Sandiaga Uno have less money in their campaign coffers, Mr Ramli said, "something is going on beyond the power of money. And his supporters have become more militant and that will carry him through."

Dr Mahathir and Mr Anwar Ibrahim, the head of Malaysia's ruling party, beat Mr Najib "just by the militancy of their supporters", he said.

Mr Joko has dismissed the allegations as baseless, but they threaten to stir tensions in the world's largest Muslim-majority country.

"There's a sense of increasing injustice among Muslims and this is very dangerous," Mr Ramli said. "They sense that law is one-sided and not for everyone."

Mr Joko's opponents have sought to foment doubt over the strength of his Muslim faith.

He has chosen to run for re-election with leading cleric Ma'ruf Amin, a move seen by many as a bid to offset Mr Prabowo's appeal to Muslim voters.

But it has also raised concerns about the prospect of political Islam gaining traction in Indonesia, making investors nervous about how it could impact economic policy and reform.

A demand for syariah-compliant securities is already surging among lenders in the country.