Speaking to the media on Monday (Aug 6) afternoon after visiting an Asian Games venue in East Jakarta, President Joko said that he has ordered the Coordinating Minister for Political, Legal and Security Affairs Wiranto to coordinate all ranks related to the quake, including the social minister, the armed forces as well as the national police.

"This is so that we can handle immediately the evacuation of the dead and injured victims, as well as the logistics among others," Mr Joko said.

"There are also many tourists, so I have ordered the Coordinating Minister (for Political, Legal and Security Affairs) to deal with them well and not let there be lacking in essential services, especially relating to flight schedules," the president added.

He also said that doctors have been sent to West Nusa Tenggara province as of Sunday night.

Expressing his deepest condolences to all victims, Mr Joko assured that the government will compensate victims whose houses were ruined by the quake, adding that authorities would first inspect the damages before deciding on the amount of compensation.

The Jakarta Post said that as of Monday afternoon, 209 people have been reported injured and thousands of buildings, including schools and hospitals, damaged. 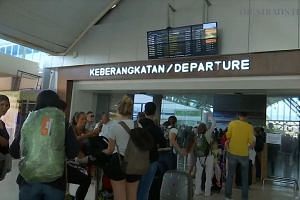 North and East Lombok saw the most damages, with 80 per cent of the buildings in several areas completely demolished by the magnitude-7.0 earthquake.

In Lading-Lading village in North Lombok, heavy-lifting equipment has arrived to help with rescue efforts to reach victims buried beneath a collapsed mosque, Dr Sutopo said on his Twitter account. Earlier, rescue workers had dug through the rubble manually while waiting for the equipment to arrive.

The earthquake on Sunday evening was the main shock, he said, while the smaller one on July 29 was the "foreshock", according to The Jakarta Post.

On July 29, Lombok Island was struck by a shallow 6.4 magnitude quake, leaving 17 people dead, 365 of others injured and 8,871 people displaced as the jolts destroyed 14,940 houses, according to the disaster agency.