DENPASAR, INDONESIA (AFP, REUTERS, THE JAKARTA POST/ASIA NEWS NETWORK) - Indonesian security forces and emergency workers raced on Monday (Aug 6) to aid victims of a powerful earthquake on Lombok that has killed more than 90 people, as strong aftershocks sparked terror on the holiday island that suffered another deadly quake just a week ago.

Rescuers searched for survivors in the rubble of houses, mosques and schools that were among the thousands of buildings destroyed in the disaster that struck on Sunday evening.  Officials said 89 people were killed in Lombok and two in Bali.

“The search and rescue team is still scouring the scene and evacuating (people),” national disaster agency spokesman Sutopo Purwo Nugroho said.  “We estimate the number of victims will rise.”

The quake, which struck the northern coast of Lombok at a depth of 15km, comes a week after a magnitude 6.4 quake killed 14 people on the island and prompted a large-scale evacuation of a volcano popular with hikers.

Indonesian officials had earlier issued a tsunami warning and urged people to move away from the ocean. “Please go to a place with higher ground, while remaining calm and not panicking,” Dwikorita Karnawati, head of the agency for meteorology, climatology and geophysics, told local TV.

In a high alert advisory, Singapore's National Environment Agency said: "There are no reports of tremors in Singapore. Regional Tsunami Warning Centres have forecast that a local tsunami may be generated near the epicentre, but Singapore is unlikely to be affected." 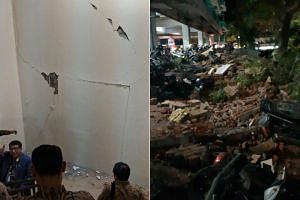 Shanmugam caught in Lombok quake: 'The room shook violently, walls cracked, it was quite impossible to stand up'

Indonesia's airport operator has said that airports on Bali and Lombok islands are operating normally after the quake, despite minor damage.

“Both airports are operating as normal, now we are cleaning up the airports. Some parts of the ceiling have fallen off, but no one is hurt,” said Mr Handy Heryudhitiawan, corporate secretary at operator Angkasa Pura 1, which runs both airports.

The quake was felt for several seconds in Bali, causing people to run out of houses, hotels and restaurants.

Singaporean tourist Ramya Ragupathi, 37, was just finishing a massage in Ubud when the quake struck at 7.45pm local time.

“I was a little shaken. It was quite intense. I felt really woozy, and at first thought it was because of the massage. But then the receptionist got everyone to move and evacuate,” she said.

Ms Ragupathi, who owns a gluten-free food firm in Singapore, also said that local staff at her accommodation stayed calm and were very helpful even as the tremors were felt.

Australian tourist Michelle Lindsay said: “All the hotel guests were running so I did too. People filled the streets. A lot of officials were urging people not to panic.”

Other witnesses said the quake got stronger over several seconds and rattled windows and doors in their frames.

“Everyone immediately ran out of their homes, everyone was panicking,” Iman, a local resident in Mataram, told AFP.

Lights were swaying and all the staff and guests in the Ikan Bakar Pesona restaurant stood up when they felt the quake.

Separately, a magnitude 5.6 earthquake jolted the Mentawai Islands in West Sumatra on Sunday afternoon, but no tsunami alert was issued following the quake, the National Disaster Mitigation Agency (BNPB) has reported.

BNPB spokesman Sutopo Purwo Nugroho said the epicentre was 38km south-west of the Mentawai Islands and around 22km beneath the seabed.

The earthquake rocked the islands, a favourite among surfers, at 3.56pm local time, and strong vibrations lasted for several seconds. No damage or casualties have been reported so far.

Indonesia, one of the most disaster-prone nations on earth, straddles the so-called Pacific “Ring of Fire”, where tectonic plates collide and many of the world’s volcanic eruptions and earthquakes occur. In 2010, a magnitude 7.2 earthquake caused a tsunami on the islands - displacing more than 2,000 families living on three affected islands. South Pagai was the worst-affected island, with 900 families who had to be relocated.

In 2004, a tsunami triggered by a magnitude 9.3 undersea earthquake off the coast of Sumatra in western Indonesia killed 220,000 people in countries around the Indian Ocean, including 168,000 in Indonesia.