SHAH ALAM (THE STAR/ASIA NEWS NETWORK) - The High Court in Shah Alam has rejected a bid to block the relocation of the Seafield Sri Maha Mariamman Temple in USJ 25 that was at the centre of riots earlier this week.

Three individuals acting as the administrators of the temple filed an application at the Shah Alam High Court on Thursday (Nov 29) to strike out the eviction order.

However, the High Court dismissed the injunction against a 2014 consent judgment ordering the temple to be relocated.

He said, however, they will go in with a civil suit against One City Development Bhd, the Selangor state government and the opposing temple faction.

"The court, after reading through all the grounds, ruled that the plaintiffs don't have grounds to get a stay at no cost," he said. 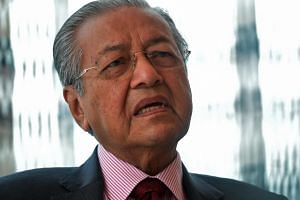 Kuala Lumpur authorities zoom in on culprits behind temple riot

Adviser Datuk Seri S. Subramaniam said the Selangor state government had previously awarded the land to the temple in 1987 and again in 2001.

On March 11, 2014, in a consent judgment recorded in the Shah Alam High Court, four parties - the temple committee, landowner One City, the Selangor state government, and the temple's opposing committee led by Mr M. Nagaraju - agreed to the relocation of the temple to USJ 23, some 2.7km away from its current location in USJ 25.

One City agreed to donate RM1.5 million (S$490,000) in compensation for the construction of a new temple on one of two plots of land given by the company.

However, Mr Nagaraju and his committee later changed their minds, citing various reasons, and asked that the temple be preserved as a heritage site.

Klang MP Charles Santiago previously said that the developer was open to discussions, but became unwilling after it was taken over by Philippines-based Ayala Corporation early this year.

After the temple was attacked by a group of thugs early on Monday morning, a riot took place as people rushed to defend the temple. Several people were hurt and vehicles were burnt.

More than 20 people have been arrested in connection with the riots.

On Wednesday (Nov 28), Home Minister Tan Sri Muhyiddin Yassin alleged that lawyers to the developer had hired the Malay thugs, which led to the riots.

One City Development has denied the allegation.

On Wednesday, Malaysian Prime Minister Mahathir Mohamad had indicated after chairing a Parti Pribumi Bersatu Malaysia meeting that the Malaysian Parliament will pass a new resolution that no houses of worship can be built without the consent of the local councils.

This was to avoid any future land disputes such as the one which led to the fracas at the Sri Maha Mariamman Temple.

Tun Mahathir said: "Temples are being built anywhere, on land that does not belong to the temple owner."

"The government will pass a resolution and make it a condition that houses of worship cannot be built without the permission of the local authorities. Temples are now being built without regard for the landowner and when the owner wants the land back, there is a problem."