SUBANG JAYA (THE STAR/ASIA NEWS NETWORK) - The chief priest of Sri Maha Mariamman temple said the storming of the temple "felt like a scene out of a Tamil movie".

Dr Jeyakumar Subramaniam claimed that he and other senior temple leaders were held down by masked assailants with knives to their necks.

"We were told by police officers on Sunday evening that the developer was coming in, and the Federal Reserve Unit and everyone else had been alerted," he said, adding he had waited for them to arrive.

Dr Jeyakumar said at about 2.15am, about 100 people suddenly arrived at the temple, some with their mouths covered and wearing high-visibility vests. They began storming the temple gates.

"They had locked the other gate, and were kicking and hitting the devotees, including women and young kids, telling them to get out," he said.

He said the assailants had also warned him during the scuffle that the land the temple was on belonged to the developer, and that the devotees must leave.

Dr Jeyakumar also showed how temple items, such as heavy brass lamps, were broken and bent during the attack.

"They wanted us to get out, but the gate was locked, and then later they told us to sit, saying that the developer was coming in. 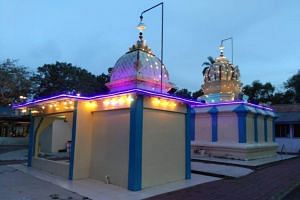 "Once the police showed up at about 4.15am, they quickly took off their vests and ran off," he said.

Dr Jeyakumar claimed the assailants also smashed up and rifled through the priest's and assistants' rooms, making off with handphones, gold and cash offerings from devotees kept in the priest's room.

Activist Elangovan Annamalai, who was injured in the attack, said he needed 10 stitches on his scalp.

The temple task force also said they had managed to recover sling bags and wallets discarded by the assailants when they fled.