MANILA - A woman has claimed the remains of one of two suspects behind an explosion last week that killed three soldiers and three civilians, saying the man was her son, and that he was Filipino.

That brought investigators a step closer to concluding that the bombing was the first case of local militants carrying out a suicide attack.

Major-General Cirilito Sobejanam, head of the Western Mindanao Command, told reporters on Tuesday (July 2) a woman on Monday identified one of the suspects as Norman Lasuca, 23.

The last time she saw him was about four years ago, she said.

She added that she and her son belonged to a Muslim ethnic group known as the "Tausug", and that her husband was a Muslim convert.

At a separate news briefing on Tuesday, Brigadier-General Edgard Arevalo said that samples were taken from the woman and the suspect for DNA testing.

General Oscar Albayalde, head of the 170,00-strong police force, said on Monday Filipinos were behind last Friday's attacks on the camp of the 1,500-man 1st Brigade Combat team, which was especially trained to go after Islamic State-linked militants. 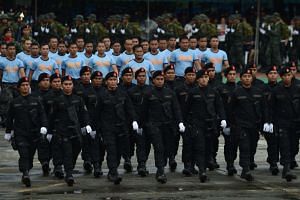 "What we know, and the (military) knows this, (is that) they are Filipinos. They are not foreign nationals," he said.

However, Defence Secretary Delfin Lorenzana said in a separate news briefing that nothing was conclusive yet. "Somebody said the bombers were Indonesians, somebody said Filipinos. But let us wait."

If confirmed, the information suggests that the Islamic State in Iraq and Syria's (ISIS) ultra-radical teachings have taken deeper roots among Filipino militants.

"Yes, yes, I believe… this has raised the level of extremism here," said Mr Lorenzana.

In the attack last Friday, two militants set off bombs strapped to their bodies at the temporary camp of the 1st Brigade Combat team in Indanan town on Jolo island, in the Philippines' restive south.

Three soldiers who were manning the camp's gate were killed along with three civilians who were nearby. The two attackers were also killed. ISIS has claimed responsibility for the attack.

A tweet last Saturday by the director of the Site Intelligence Group, which monitors extremist groups, showed a photo of two militants who ISIS said carried out the attacks. They appear to be in their 20s, are Asians and wearing what looked like vests laden with bombs.

There have been two other instances of suicide bombings in the Philippines, but these involved foreign militants.

Security officials and some analysts have long assumed that local extremist groups such as the Abu Sayyaf, although pledging allegiance to ISIS and providing sanctuary to militants from abroad, eschew suicide attacks as a weapon.

In January, an Indonesian couple, with help from a faction of the ISIS-linked Abu Sayyaf group, attacked Jolo's Roman Catholic cathedral, killing 23 people and wounding at least 100.

In July last year, a Moroccan, identified as Abu Kathir Al-Maghribi, detonated bombs hidden inside a van he drove to an army checkpoint on Basilan island, near Jolo. The blast instantly killed a soldier, five paramilitaries, four civilians - including a mother and her child - and the bomber.

Maj-Gen Sobejana said on Sunday that Al-Maghribi's 14-year-old son could have been the other bomber in Friday's attack.

The Abu Sayyaf, founded in the 1990s with seed money from Osama bin Laden's Al-Qaeda network, has been tagged as the top suspect in the attack.

"I think we have a lot of work to do," Mr Lorenzana said on Tuesday.

Cholo Abdi Abdullah had been studying to be a pilot, and was plotting to hijack a plane, police said.

An improvised explosive device, a hand grenade, various bomb-making materials and a 9mm pistol were found inside his hotel room.