LONDON (REUTERS) - Facebook apologised on Wednesday (Aug 8) after users posting about a deadly earthquake in Indonesia on the social media platform saw their messages decorated with images of balloons and confetti.

A 7-magnitude quake struck the tourist island of Lombok on Sunday, killing at least 347 people and leaving thousands homeless, according to the government-run Antara news agency.

"The feature (automatic animations for 'congratulations' in posts) is widely available on Facebook globally," a spokesman for the world's largest social network said in a statement.

"However we regret that it appeared in this unfortunate context and have since turned off the feature locally."

A humanitarian crisis looms in Lombok, which was rocked by another deadly quake last month that killed 17 people, with thousands of victims of Sunday's disaster in desperate need of clean water, food, medicine and shelter, aid agencies say.

Many people on the island have been using Facebook's Safety Check feature - launched in 2014 - which allows users to notify their friends and relatives that they are safe after disasters.

“Congrats” in Indonesian is “selamat”. Selamat also means “to survive.”

After the 6.9 magnitude earthquake in Lombok, Facebook users wrote “I hope people will survive”. Then Facebook highlighted the word “selamat” and throw some balloons and confetti. pic.twitter.com/DEhYLqHWUz 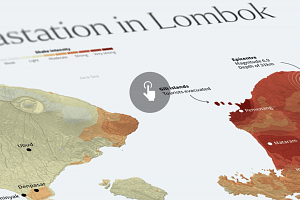 "Waiting for friends of mine in Lombok to check in (again)".

Yet social media companies must take better precautions when designing features to be used during disasters such as the Lombok earthquake, according to Siane Monreal, social media manager for the International Committee of the Red Cross (ICRC).

"Imagine if you were waiting for hours without any news of your loved ones. You were fearing the worst. Then finally you see on Facebook that they are ok - and then you see balloons,"she told the Thomson Reuters Foundation.

"That's not a celebration, and it's not appropriate."