BANGKOK - Thailand's Constitutional Court on Thursday (March 7) dissolved a political party which tried to nominate the king's sister for the role of prime minister, ruling it out of the much-awaited March 24 general election.

“The accused involved a high-ranking member of the royal family in politics, in a way which the average Thai can see that the monarchy – which is viewed with utmost respect and is at the heart of the nation – had been used to gain political advantage,” a judge said in court. It risked causing the monarchy to lose its status of being above politics, he said.

The party, the panel of judges deemed, was “hostile to the democracy with a constitutional monarchy”.

Its executives were banned from politics for 10 years.

Calling the dissolution “extremely regretful”, party leader Preechapol Pongpanit’s voice broke with emotion as he told reporters: “It’s not just the party that was dissolved. The basic rights of the people were also affected.”

He added: “Even though we can’t achieve our dream, I thank you all for your support. There is more work to do for this country, and those who are here will keep on working.”

Dozens of supporters, wearing the party’s T-shirt, had gathered near the court even as hundreds of policemen had fanned out around the courthouse on the outskirts of Bangkok to prevent any unrest.

After the verdict, some of the supporters raised their fists in the air and shouted “Fight! Fight”.

Thai Raksa Chart, a four-month-old party, stunned the kingdom on Feb 8 when it nominated Princess Ubolratana Rajakanya - the elder sister of King Maha Vajiralongkorn - for the post of prime minister.

Although the princess had relinquished her title in 1972, she is still treated as a royal. Given the Thai reverence for the monarchy, her nomination would have given a crucial edge to Thai Raksa Chart and its larger Pheu Thai party, which was ousted from government by a military coup in 2014.

But the king swiftly vetoed her nomination on the same day, stressing that she was still a royal and supposed to remain above politics.

The Election Commission, which later disqualified Thai Raksa Chart's nomination, proposed that the party be dissolved for being "hostile to the constitutional monarchy". 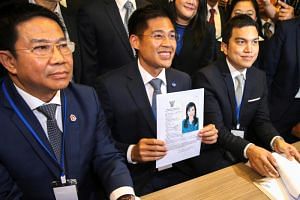 On Thursday (March 7), Princess Ubolratana wrote on her Instagram account that the dissolution was “very sad and depressing”.

She had apologised on the platform after the uproar, saying that her "honest intention to work for the country and the Thai people have caused problems that shouldn't have occurred in this era".

Thailand's new electoral system introduces a stronger element of proportional representation, making it difficult for big parties to dominate the 500-seat House of Representatives like before.

Thai Raksa Chart, founded by many former Pheu Thai members, was seen by analysts as Pheu Thai's bid to raise the number of seats it could win in the election.

Running in the same March 24 poll are several parties striving to get current prime minister Prayut Chan-o-cha reinstated as premier after the election.

Palang Pracharath Party, led by four key former ministers of his Cabinet, have nominated the former army chief for the post of prime minister.

In the run-up to the court decision, Thai Raksa Chart did not let up in its cross-country election campaign, arguing that the five-year-old military government had not done enough to help the average households bogged down by moribund incomes and stubborn debt.

Rangsit University political scientist Wanwichit Boonprong thinks that the party's dissolution - rather than tilting the balance towards the pro-Prayut camp - would simply make Thai Raksa Chart voters pick other parties which have similarly criticised junta rule and military dominance.

However, with the king's coronation scheduled from May 4 to 6, Dr Wanwichit did not expect the dissolution to trigger street protests like those that roiled Thailand over the past decade of political turbulence.

"That's impossible," he told The Straits Times. "This year is an auspicious year for Thai people... No one will go on to the street."

Thailand’s SET Index rose by 0.47 per cent at the close of trading.