KUALA LUMPUR (AFP) - With his scandal-tainted career and her reputation as greedy and domineering, Malaysia's disgraced former first couple look set to have their names etched in the country's history books as synonyms for the corruption of power.

Seemingly secure just a week ago, Mr Najib Razak and his wife Rosmah Mansor face a tightening noose as a new government that unexpectedly won elections last week ramps up investigations into allegations of graft and excess that have hung over the pair for years.

The fast-moving developments are a stunning comeuppance for a couple that have towered over Malaysia for a decade, but ultimately were brought down by greed and hubris.

The bland patrician son of one of Malaysia's founding fathers, Mr Najib, now 64, had been groomed for the prime minister's post from young.

He took over in 2009 but was widely viewed in Malaysia as being heavily influenced by Madam Rosmah, who is two years his senior.

Mr Najib headed the once-invincible ruling coalition that had held power for six decades, but the couple were never embraced by large numbers of ordinary Malaysians.

The UK-educated Mr Najib was seen by many as an aloof elitist with little understanding of Malaysia's common citizenry, a perception accentuated by frequent tone-deaf gaffes and policies such as the 2015 introduction of a sales tax unpopular with the poor and now set to be eliminated.

Madam Rosmah, meanwhile, has been a constant lightning rod for critics due to her imperious manner and elaborately coiffed mane of hair, which she once complained cost her 1,200 ringgit (S$405.83) per house-call from stylists.

Malaysia's minimum monthly wage at the time was 900 ringgit.

That and similar episodes caused her to be reviled in a multi-cultural country where most of the population are modest-living Muslims.

Opponents would leak flight plans allegedly tracking Madam Rosmah's shopping jaunts aboard government planes to Rome, the US and Australia.

Her luxurious tastes included numerous reports of jewellery purchases costing tens of millions of dollars and a vast collection of designer handbags that has earned comparisons to the famed shoe collection of Imelda Marcos, wife of former Philippine dictator Ferdinand Marcos.

Madam Rosmah's bag fetish was back in the spotlight on Friday (May 18), with officials saying they had seized dozens of high-end Hermes and Louis Vuitton bags, cash, and jewels as part of an investigation into the alleged looting of state funds by Mr Najib, his family and cronies.

Madam Rosmah last month waved off criticism, saying, "In politics, we just have to go through it and smile, and that is the best medicine for them (critics)."

New Prime Minister Mahathir Mohamad has said that Mr Najib told him in a private conversation in 2015 that "cash is king" in maintaining political support in Malaysia, a phrase that opponents have turned against Mr Najib as a sign of his hubris and corruption.

Money and power seemed to work as a firewall against Mr Najib through a scandal involving Malaysia's 2002 purchase of French submarines while he was defence minister, a deal brokered by a close associate of his.

Allegations later emerged of huge kickbacks to Malaysian officials to secure the deal, and the scandal was punctuated by the murder of a Mongolian woman, Altantuya Shaariibuu, who was involved in the negotiations.

Her body was blown up near Kuala Lumpur using military-grade explosives.

Two officers in a special unit that guarded Malaysian ministers were convicted of the killing, but suspicion that Mr Najib and Madam Rosmah were involved has hovered for years, with Mr Najib at one point being forced to deny he had an affair with the 28-year-old Altantuya.

But the final straw was 1MDB.

Public disgust with reports that began to emerge four years ago detailing the plundering of the sovereign wealth fund snowballed into last week's Dr Mahathir-led electoral tsunami that now has Mr Najib in police crosshairs.

Billions of dollars are said to be missing in the scandal, nearly US$700 million (S$940.07 million) of which was deposited into Mr Najib's bank account alone.

US authorities say Mr Najib's entourage used hundreds of millions in diverted 1MDB funds to purchase high-end real estate in Beverly Hills, New York and London, a Monet painting for US$35 million, a US$5.5 million Van Gogh, a US$35 million Bombardier jet and to finance the 2013 Hollywood film The Wolf of Wall Street.

A 2015 investigative report by the New York Times also alleged that millions of dollars were used to purchase jewellery for Madam Rosmah.

Mr Najib has steadfastly denied wrongdoing, while persecuting his accusers and shutting down media outlets that reported on the affair.

Having now lost the protections of power, Mr Najib and Madam Rosmah face a growing public groundswell to see them jailed.

As if sensing this, the once-defiant Mr Najib tweeted after the election: "I apologise for any shortcomings and mistakes." 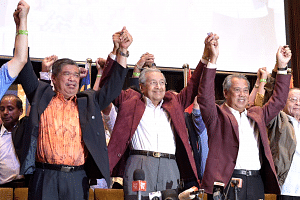 The shock election: How a Mahathir tsunami swept Malaysia

Zunar, as he is popularly known, has skewered the couple for years, particularly Madam Rosmah's huge hair and diamond lust, earning a sedition charge that he now expects to be dropped.

"I would love to see her arrested by the police. I think most Malaysians think like me," he told AFP.

But he called Madam Rosmah his "inspiration".

"I'll miss her if she is arrested because I won't have material for my drawings."