A member of a panel which reviewed the case files of the Malaysian Anti-Corruption Commission (MACC) has said it found evidence that about US$10.6 million (S$14.2 million) was transferred from state fund unit SRC International to an account belonging to Datuk Seri Najib.

MACC officials were at Mr Najib's residence in Taman Duta, Kuala Lumpur, yesterday. "They are there to serve notice (to Najib) to attend MACC on Tuesday next week to record a statement related to SRC," one of the sources said. Another MACC source confirmed the matter.

According to Bloomberg, the government led by Prime Minister Mahathir Mohamad is considering investigating Mr Najib for abuse of power, as it intensifies efforts to seek evidence of wrongdoing at scandal-plagued 1MDB just days after taking over.

The MACC laid out in recent days a comprehensive list detailing the potential scope of investigations into 1MDB, according to people who have seen the document.

Examples of potential abuse of power by Mr Najib that the agency identified include witness suppression and the blocking of a central bank criminal case.

Mr Najib had indicated at the outset that he was "prepared and willing to extend his fullest co-operation to the relevant authorities", his lawyer Harpal Singh Grewal said in a statement on Thursday in response to a raid on his client's home.

A spokesman for Mr Najib referred Bloomberg News to this statement when asked for comment.

Among the other areas the commission is looking into are whether criminal breach of trust was involved in a letter of support from the Ministry of Finance for 1MDB bonds; alleged fraudulent investment by the fund; an unauthorised bond issuance by the fund outside of its articles of association; and funds flowing into Mr Najib's personal account.

Since Tun Dr Mahathir defeated Mr Najib's government in a shock election victory last week, he has barred his former protege from leaving the country, and police have searched Mr Najib's home and seized documents from his former office this week.

A parliamentary committee in 2016 identified at least US$4.2 billion (S$5.64 billion) in irregular transactions by the fund.

On Thursday, the Prime Minister set up a separate committee to look into matters relating to 1MDB. 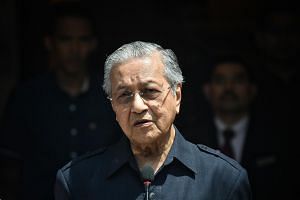 Mahathir and hopes of change

Malaysia to consider probing Najib for abuse of power

"Until and unless the issue of 1MDB is resolved, there will be questions that undermine public confidence in the government and its institutions," said a statement issued by Dr Mahathir's press office.

Mr Shukri was deputy chief commissioner at the agency until he retired in 2016 amid a 1MDB probe.

Mr Najib has denied any wrong-doing and was cleared by the attorney-general at the time, while the fund has repeatedly denied any misconduct.

The 1MDB scandal spawned global probes as investigators tracked a money trail stretching from Switzerland to Singapore and the United States.

The US Department of Justice alleges that US$3.5 billion from the fund went missing.

A dozen people linked to the 1MDB scandal have been barred from leaving Malaysia in the wake of the fresh probes, reported The Star. A source told the news site the move was to ensure the authorities could reach them immediately.

"Those on the travel blacklist were either involved directly with or have knowledge of the company and the financial transactions carried out," the source said.

A version of this article appeared in the print edition of The Straits Times on May 19, 2018, with the headline 'Anti-graft agency wants statement from Najib: Report'. Subscribe
Topics:
More
Whatsapp Linkedin FB Messenger Telegram Reddit WeChat Pinterest Print Copy permalink