According to the official tally by the Election Commission, the Umno candidate from BN won by a majority of 1,914 votes.

The other two men in the four-way contest were from small Parti Sosialis Malaysia (PSM) and an independent candidate.

Total voter turnout was 73.24 per cent, the highest of the six by-elections - including for Semenyih - since the general election in May last year.

The PH loss is a blow to the ruling coalition, as this was the first time the incumbent party had failed to retain a seat won in May, in six by-elections. 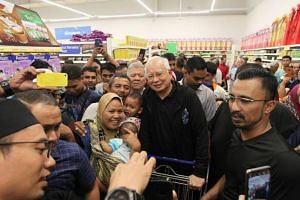 PH retained four of these seats (three in Selangor and the other in Port Dickson, where PKR leader Anwar Ibrahim staged his political comeback) in recent by-elections, and BN held on to the Cameron Highlands seat in a by-election in January.

Umno Youth chief Asyraf Wajdi Dusuki earlier tweeted a picture of him with the party's acting president Mohamad Hasan and other leaders, before official results were announced.

"At the BN command centre with BN top leadership. Alhamdulillah (God be praised), unofficial results show that BN has won the Semenyih state seat. Thank you to all of Semenyih!" Mr Asyraf said.

PH has been struggling to gain more support from the Malays in recent months, and 69 per cent of the Semenyih voters were Malays.

Said PPBM's vice-president Mukhriz Mahathir after the results were known: “We’ve tried our best to reach out to the people here, but the voters know their choice best. So we accept the outcome with an open heart."

He told reporters at PH's operations centre in Semenyih, as quoted by The Star newspaper: “We will try our best to address our mistakes and shortcomings.”