BANGKOK - Asean has committed itself to reduce marine waste at both the nation and regional level, a move welcomed by Singapore Prime Minister Lee Hsien Loong, as he highlighted the need for the countries to work together to combat the scourge.

The transboundary nature of environmental challenges, from marine debris to haze pollution, "makes it impossible for any single country to solve the issue alone", he told his counterparts at the start of the 34th Asean Summit last night in Bangkok. "This is why Singapore strongly supports efforts to cooperate at the Asean level."

"Marine pollution impacts not just public health and food supply, but also industry and tourism," he added, noting that four of the world's top marine plastic polluters are in South-east Asia. "In Singapore, marine debris washes onto our shores regularly. There are so many beautiful beaches in South-east Asia and they are at risk of being polluted if we don't bring the problem under control."

The first of its kind, the Bangkok Declaration that was adopted on Saturday (June 22) stressed Asean's concern over the rising level of marine debris, in particular marine plastic litter, on marine life, fishing, fisheries, and tourism. It said there is also an urgent need to understand the impact of microplastics on people.

Among the ways Asean aims to tackle the problem is to adopt a more holistic land-to-sea approach, strengthen research capabilities, enhance regional and international cooperation, and increase public awareness.

Thailand, which is Asean chair this year, chose sustainability as its theme for this summit, with delegates getting recycled paper notebooks and tote bags.

In his opening remarks, Thai PM Prayut Chan-o-cha said he hoped the theme will help Asean "realise a people-centred community that leaves no one behind and looks to the future", as well as enhance the regional bloc's strategic value. 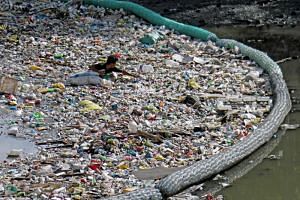 Singapore to offer programmes in climate change to Asean: Masagos

A 2017 Ocean Conservancy report found that five Asian countries - China, Indonesia, the Philippines, Vietnam and Thailand - dump more than half of the eight million tonnes of plastic waste that end up in the oceans every year.

Some activists believe the new declaration does not go far enough and lacks concrete plans to cut the use of single-use plastics such as straws, or fine the worst-offending companies.

"If we are not reducing single-use plastic at the production process, this 'Bangkok Declaration'... will not succeed," Mr Tara Buakamsri of Greenpeace in Thailand told Agence France-Presse.

In his speech, PM Lee stressed that the larger issue is waste management, and the need to reduce the amount of waste produced. This not only includes plastic waste, but also untreated liquid and semi-solid waste.

In Singapore, almost all non-recyclable waste is incinerated and the ashes shipped to the island landfill Pulau Semakau. "But landfills take up a lot of space, and Singapore cannot afford to create more and more of them," he said.

"So we have to aim even higher, to become a 'zero waste' nation, by reducing our consumption of materials and reusing and recycling them to give them a second lease of life."

PM Lee also pointed out that sustainability goes beyond saving the environment. "It is also about economic development and giving people a better quality of life."

PM Lee said Singapore will support practical efforts to tackle other transboundary issues. For example, the Asean Specialised Meteorological Centre in Singapore is working with the nine other member states to enhance their capabilities to detect forest fires quickly.

He also announced that Singapore will host the second Asean Climate Change Partnership Conference, to be held tentatively in August, to carry on the conversation on how to deal with environmental issues.

Acknowledging that there are no easy solutions, PM Lee said: "Our approach needs to be holistic, and are often beyond the reach of any single country. We must work together to ensure that South-east Asia will remain a liveable and vibrant place for many years to come."

Leaders also signed a vision statement on Asean cooperation, as well as an agreement on how to boost culture in the region.