In this article, the writer says Anwar's move to contest in Port Dickson may be a choppy one, but the PKR president-elect would be able to ride it out.

PETALING JAYA (THE STAR/ASIA NEWS NETWORK) - The result of the coming Port Dickson by-election is a foregone conclusion for Datuk Seri Anwar Ibrahim. He is certain to emerge as the victor and make his comeback into the Dewan Rakyat.

It will also be his first step towards his progression as successor to Prime Minister Tun Dr Mahathir Mohamad, which the elder leader has repeatedly said he will pass the baton to the Parti Keadilan Rakyat (PKR) president-elect.

If there is anything to take the shine away from Anwar's win in Port Dickson, it will be the majority that he can secure.

After all, none of the opponents seems keen to take him on. The Malaysian Indian Congress (MIC), which had contested in the last round, has said it is staying out.

The Islamist party has refused to commit itself. Its elections director Dr Ahmad Samsuri Mokhtar reportedly said at the moment, the party was in the midst of evaluating whether to contest, as it had yet to receive details on the by-election.

On the surface, it looks like it's plain sailing for Anwar as there appears to be a lack of serious opposition. But the real danger could be from within the PKR, as Anwar has picked an unusual time to contest a by-election. 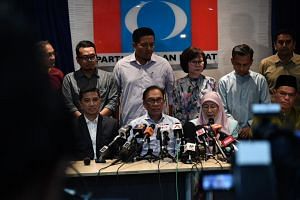 Perhaps, he wants to be in the Dewan Rakyat, in time, for the tabling of the Budget in November.

But there are plenty of under-currents in the seas off Port Dickson now. It is seriously choppy, as doubts have been raised, in defiance and openly, on his choices to have a by-election.

The open rebellion by some senior leaders has been well reported, and it is something that Anwar never expected, and certainly unused to, as the party supremo.

All these questions, which had previously haunted him, have been resurrected. He is, again, accused of being a man in a hurry.

Never mind if he's already 70 years old and has languished in prison long enough, and the current PM is already 93 and impossible to live forever - but he's stuck with the same label of being an impatient man.

He has to answer some questions clearly - why he did not ask his wife or daughter to step down instead? It is actually not that difficult a question to answer but the trouble is that he has not.

Anwar, for example, cannot ask Nurul Izzah to quit her Permatang Pauh seat and contest a state seat, due to a constitutional amendment in 1990 to Article 48(6) that an MP resigning his seat is disqualified from contesting for the House for five years. And we all know and acknowledge the competence and efficiency of Nurul.

And what about Datuk Seri Dr Wan Azizah Wan Ismail - if she quits and paves the way for Anwar, it would mean a Deputy Prime Minister post becomes vacuum, and it will allow someone else to assume the powerful seat.

In the event that something happens to Dr Mahathir, the DPM automatically becomes the successor, and this is the tricky part.

If Anwar becomes DPM, it gets complicated because Anwar will be back actively in government and there lies the danger of possible differences in leadership. Its déjà vu, all over again.

The two have rightly made an agreement - Anwar will take care of reforms in Parliament and serve as a backbencher in support of Dr Mahathir's administration.

"I will be in Parliament to support Dr Mahathir (as Prime Minister), and not to ask him to step down from the government. We will allow him to lead without any pressure," he said.

Anwar also needs to come out clear that he has no plans to play footsie with discredited Umno leaders like Datuk Nazri Aziz, who has offered to campaign for him.

Surely, Anwar must have received feedback that the sentiment on the ground towards Nazri is very bad, as he is a classic example of Umno leaders who flouted their arrogance when Umno was in power.

In simple words - Pakatan voters will not welcome and by not saying no to Nazri openly, it has allowed his enemies to cast doubts and suspicions on his agenda, even if there was none. This is simply because Anwar has a trust deficit.

He may be a reformed person just like Dr Mahathir, as both are now more mature, wiser and iconic in their own inimitable style and ways of leadership.

Anwar needs to speak clearly with one voice to win the hearts and minds of Malaysians in this social media era.

We all understand the need for Anwar to be an MP and park himself as a successor until the party elections are over.

But he appears trapped in the murkiness, dim and gloomy political imbroglio and embarrassment as Malaysians voice their opinion about him "grabbing" the Port Dickson seat.

Anwar does not need Umno nor PAS - he just needs the majority of Malaysians, who voted out the Barisan government - to stay with him.

These Malaysians, of all races and religions, were just tired of the race and religion card, used by Umno and PAS, and wanted them out.

Stay your course with the people who wanted a New Malaysia, and you will ride through the choppy waters.

M. Krishnamoorthy is an associate professor, media coach and author. He was a journalist with The Star and New Straits Times. His sixth book, 'May 9 - People Power Saves Malaysia - Mahathir Leads the Way' was the best seller last month.

The Star is a member of The Straits Times media partner Asia News Network, an alliance of 23 news media organisations.