BEIJING - Chinese President Xi Jinping has called for more countries to join his pet mega-project, the Belt and Road Initiative (BRI), even as world leaders expressed their support and rejected protectionism.

In a joint communique at the end of the Belt and Road Forum in Beijing, Mr Xi and foreign leaders agreed to further open their markets and promote green growth and sustainable financing for BRI projects.

Mr Xi made similar points at a 15-minute press conference on Saturday (April 27) that closed out the three-day event where Beijing has sought to address international criticism over the project to revive old trade links.

"All interested countries are welcome to join us. We are committed to supporting open, clean and green development, and rejecting protectionism," said Mr Xi.

The press conference - where Mr Xi did not take questions - was held after meetings with the world leaders attending the summit, the second edition of the forum.

Conceived in 2013 by Mr Xi, the BRI aims to build a vast mercantilist framework linking China to Europe, Africa and the rest of Asia by building a network of ports, roads, railways and trading hubs - reviving ancient overland and maritime trade routes.

But the plan has also been criticised as being a form of "debt-trap diplomacy", where poor countries are saddled with loans and become pliant to China. 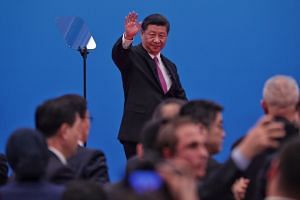 World leaders point to BRI as model of globalisation

China to refine Belt and Road push after taking in criticisms

It is also said to support polluting industries, and to benefit China more than partner countries.

Beijing has sought to rebrand the BRI at this year's forum as a green and sustainable platform that is open and inclusive.

The joint communique released by leaders on Saturday mentioned the word "green" seven times. It was not mentioned in the communique of the 2017 forum.

On the first day of the forum, Beijing also released an analysis framework aimed at helping countries manage debt.

On Saturday, Beijing also released a list of 283 deliverables, including initiatives on cultural exchanges, scholarships and programmes for youths in partner countries.

It also noted the latest countries to sign on to the BRI, such as Peru, Italy and Cyprus, and listed deals that Beijing is inking with Singapore, including one on third-party cooperation.

"In all Belt and Road cooperation projects, the government will provide guidance, enterprises will act as the main players, and market principles will apply," said Mr Xi.

"This will make the projects more sustainable, and create a fair and non-discriminatory environment for foreign investors."

There were 37 foreign leaders, including Prime Minister Lee Hsien Loong and all nine other Asean leaders, at this year's forum, up from 29 in 2017.

Earlier in the day, PM Lee told a leaders' roundtable that the BRI was a platform where China could both assume a position of greater influence and contribute more to the world.

Mr Xi's press conference on Saturday also brought to an end an event that at times seemed disorganised and chaotic, with reporters and delegates given hazy schedules or left unclear about which discussions they could attend.

But observers say the clear message coming out of the event is that China wants to shift the BRI into a more multilateral platform.

"With more multilateral participation, some of the misunderstandings about the BRI will be addressed," said Dr Wang Huiyao, president of the Beijing-based Centre for China and Globalisation think-tank.

Mr Daniel Russel, vice-president of the US-based Asia Society Policy Institute, also said: "China's challenge now is to demonstrate that the Forum's lofty rhetoric about 'Green BRI' and 'Clean BRI' has been translated into action throughout the Belt and Road."