TOKYO (REUTERS) - US Navy ships conducted joint drills with warships from allies Japan, Australia and South Korea in their first combined exercise in the Western Pacific, the US Navy said on Thursday (May 23).

The Pacific Vanguard exercise too place near the US island of Guam, ahead of US President Donald Trump's visit to Japan this weekend, as Washington looks to allies in Asia to help counter China's military might in the region.

"Pacific Vanguard joins forces from four, like-minded maritime nations that provide security throughout the Indo-Pacific based on shared values and common interests," Vice-Admiral Phillip Sawyer, commander of the US Navy's Seventh Fleet, said in a statement.

The six-day exercise involves two Japanese destroyers, two Australian frigates and a destroyer from South Korea, with as many as 3,000 sailors participating.

The US Navy has deployed five ships as well as fighter jets and maritime patrol planes for the drills, which include live fire and anti-submarine warfare exercises.

Pacific Vanguard is the latest show of combined naval force in the Asia-Pacific region.

This month US ships conducted drills with French, Japanese and Australian ships in the Bay of Bengal, and held separate exercises with a Japanese helicopter carrier and warships from India and the Philippines in the disputed South China Sea. 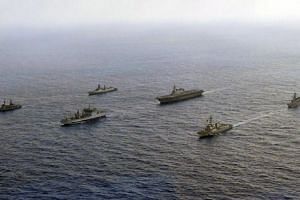 US, Japan, India and Philippines challenge Beijing with naval drills in the South China Sea

China claims almost all of the strategic South China Sea, through which about a third of global seaborne trade passes.

Brunei, Indonesia, Malaysia, the Philippines, Taiwan and Vietnam have competing claims to the waterway.

On Wednesday, the US Navy sent two ships through the Taiwan Strait, its latest transit through the sensitive waterway and a move likely to anger Beijing at a time of tense relations between the world's two biggest economies.

Taiwan is one of a growing number of flashpoints in the US-China relationship, which also include a bitter trade war, US sanctions and China's increasingly muscular military posture in the South China Sea, where the United States also conducts freedom-of-navigation patrols.