WASHINGTON - Singapore must hope for the best but prepare for the worst, said Foreign Minister Vivian Balakrishnan on Friday (May 17) in a warning about protracted tensions between the United States and China.

"While we need to hope for the best, we need to also prepare for a period of increased volatility, potential slowing down of growth rates, and in the worst case scenario a major reordering of global supply chains," he said in an interview at the end of a four-day visit to Washington DC.

His visit coincided with tensions between the US and China taking a turn for the worse, with increasing acrimony over ruptured trade negotiations and President Donald Trump's move on Wednesday to blacklist Chinese technological giant Huawei in the US.

What stood out was clear bipartisan anxiety in Washington about the state of trade relations between the US and China, said Mr Balakrishnan: "This year, that tension is palpable."

Any disturbance or disruption to global trade will have an outsized impact on Singapore, which counts the US as its largest investor and China as its largest trading partner, he said.

It is too early to tell how trade negotiations will pan out and the next few weeks will be critical, added the minister, who has been to Beijing in the past month.

"We've emphasised that our hope is that China and the US will find a way to compete and collaborate effectively. We've tried to make the argument that globalisation and free trade are not zero-sum games," he said. 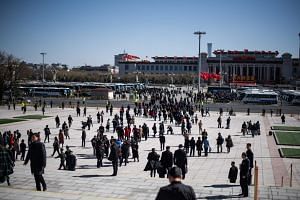 China not interested in trade talks with US for now: State media

China has a $5 trillion war chest to counter US tariffs

Trump's tariffs aim to hurt the Chinese, not to help Americans

"I think there's still positive will to arrive at a constructive solution and we have to hope for the best. In the case of Singapore, we are in between whether we like it or not. We are at risk if they don't resolve this,"

Beyond the stock market's heightened volatility in the short term, the medium term risk is that economic growth will slow if businesses lose confidence and investments are curtailed or held back, he said.

But the longer term anxiety is if the two superpowers cannot reach an agreement that allows them to coexist peacefully, global supply chains that have been tightly interwoven over the past 70 years will be forced apart and broken.

"The formula for peace and prosperity which has prevailed for seven decades would be at big risk," he said.

Singapore needs to double down on its domestic efforts at restructuring its economy and training its workers today for tomorrow's jobs in light of this international volatility, he said.

"We need to work even harder and with a greater sense of urgency to restructure ourselves domestically, because we know that all these external challenges are rising, and no one can quite predict with absolute certainty whether the current tensions are going to be resolved quickly or whether we'll go into a protracted period of uncertainty," he said.

Mr Balakrishnan, who is also Minister-in-charge of Singapore's Smart Nation drive, is also worried about a "Splinternet" - a splintered Internet as different countries operate their digital economies according to different standards and norms.

Singapore would like to see decisions on global rules for the digital economy made multilaterally, but this requires an establishment of strategic trust between all the major players like the US, China and Russia, said the minister.

"If this is not achieved, then you will end up with bifurcated supply chains, a bifurcated internet, it will be a much less efficient world," said Mr Balakrishnan.

"A much less hospitable world," he added.

The minister, who met Secretary of State Mike Pompeo, National Security Advisor John Bolton and several senators and Congressmen from both parties, said that Singapore's ties with the US are excellent and their defence relationship was as close as ever.

Both sides are currently negotiating to renew the memorandum of understanding signed in 1990 that allows the US military to use Singapore's Changi Naval Base and Paya Lebar Air Base, said Mr Balakrishnan.

Mr Balakrishnan highlighted the importance of the US' continued engagement in the region, including through Asean, in his meetings with Mr Pompeo and Mr Bolton, said the Ministry of Foreign Affairs in a statement.

Mr Balakrishnan and Mr Pompeo also discussed ways to work together to address persistent global challenges, with the aim of reducing threats related to terrorism and proliferation, said the US State Department in a statement.

The minister hosted a reception on Thursday night for the congressional Singapore caucus, a bipartisan group of around 60 Congressmen with an interest in strengthening US-Singapore ties.

Democrat congressman Ed Case of Hawaii said: "Despite the many partisan issues we're dealing with today...the Congress still believes that America has a place in leading this world. The Congress believes that the Indo-Pacific area is where a bunch of this world's history is going to be written going forward, and we believe we need to work with you and all the countries of the Asia-Pacific region in cooperating...whether in defence, trade, cultural, or to address China over time."