BEIJING (BLOOMBERG) - Almost three months after their trade talks broke down in acrimony, Chinese and American negotiators will meet again in Shanghai this week amid tempered expectations for breakthroughs in their year-long trade war.

Two days of talks are scheduled to restart on Tuesday (July 30) after a truce reached by Presidents Donald Trump and Xi Jinping on the sidelines of the Group of 20 summit in Osaka, Japan, last month.

Deep tensions remain, though, and recent days have brought mixed signals from both sides, with neither showing an urge to compromise.

The People's Daily newspaper said in a commentary on Monday that the move is a "concrete", "goodwill" step to implement the consensus reached by Mr Xi and Mr Trump in Japan, and called on the US to reciprocate and meet China halfway.

Nevertheless, Beijing has also called the US the "black hand" behind anti-government protests in Hong Kong and said last Friday that an investigation into FedEx Corp's claims that it mistakenly rerouted Huawei Technologies packages to the US found additional legal violations.

Mr Trump has spoken with tech executives about the ban on selling products to Huawei and potentially easing that prohibition while other US officials played down the possibility of a quick trade deal.

At stake is the health of the global economy, which is being weighed down by uncertainty for markets and companies. The International Monetary Fund last week further reduced its estimates for global growth and warned that damage was to some extent "self-inflicted" by prolonged uncertainty caused by the trade war, escalating tensions over technology and Brexit.

"There is still a huge gap between the two sides on key sticking points," said Mr Robin Xing, chief China economist at Morgan Stanley in Hong Kong. "So far, there is still no clear path towards a comprehensive deal." 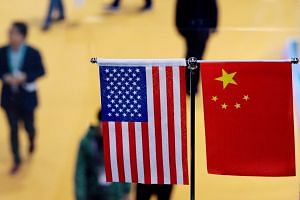 China to amend patent law to pacify US, spur innovation

China is holding to its three key demands: The immediate removal of all existing tariffs, a balanced agreement, and realistic targets for additional Chinese purchases of American products.

No achievements would be made if the US sticks to its existing stance during the Shanghai talks, Taoran Notes, a blog run by the state-owned Economic Daily newspaper, said last Friday.

The US should remove all additional tariffs first if it wants to reach a deal, and equality and respect between the two sides are the only way to reach agreement, it said. China is not afraid of US threats to impose tariffs on an additional US$300 billion of Chinese goods, it said.

Among the US's demands are structural reforms to China's economy, greater protection of intellectual property rights and a more balanced trading relationship.

Secretary of Commerce Wilbur Ross said last Tuesday that Mr Trump's objective was to get "a proper deal".

Leading the delegation from Washington, US Trade Representative Robert Lighthizer and Treasury Secretary Steven Mnuchin "will put forth the view we'd like to go back to where we were last May, where we did not have an agreement but we seemed to be about 90 per cent of the way there", White House economic adviser Larry Kudlow told reporters last Friday.

The prospects for an agreement are hampered by tensions over geopolitical issues including Hong Kong, North Korea, Taiwan and the South China Sea.

Huawei remains a key point of contention, with China last week urging the US to block a proposed Bill that would stop the Chinese telecoms giant from accessing US patents. 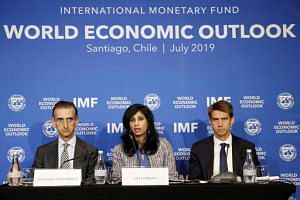 Trump says China may delay trade deal until after 2020 elections

Some in the US administration also are concerned that the elevated role of Commerce Minister Zhong Shan in Shanghai may bode ill for the talks. He has a reputation as a tough negotiator and is seen by some on the American side as a hard-liner who could make discussions even more hostile than they have been already.

Though he has not named Mr Zhong, Mr Kudlow warned a number of times in recent weeks that the inclusion of new "hard-liners" on the Chinese side could complicate efforts to secure a deal, and thus lead Mr Trump to impose more tariffs as he has threatened. Still, such a view is dismissed by China analyst Pauline Loong, managing director at research company Asia-Analytica in Hong Kong.

"This is not some minor discussion with give and take on minor issues," she said. "The concessions now needed to clinch an agreement will require decisions at the Politburo Standing Committee level, not at the level of the negotiating team."

The discussions will cover a range of issues, including intellectual property, forced technology transfer, non-tariff barriers, agriculture, services, the trade deficit and enforcement, according to a White House statement.

"China is not going to make dramatic concessions, so the issue for the US side is whether it wants to accept a practical compromise or resume escalation," said Mr David Dollar, a former US Treasury attache in Beijing, who is now a senior fellow at the Brookings Institution in Washington.

Last Friday, Mr Trump said China may wait until after the 2020 US presidential election to sign an agreement because Beijing would prefer to reach a deal with a Democrat. "I think that China will probably say, 'let's wait,'" he told reporters in the Oval Office. "When I win, like almost immediately, they're all going to sign deals."