SEOUL - South Korea aims to declare a formal end to the Korean War by the end of this year and the leaders of North Korea and the United States have discussed the issue, media reports quoted the country's foreign minister as saying on Monday (June 18).

Ms Kang Kyung Wha also told reporters sanctions against North Korea could be eased once it takes "substantive steps towards denuclearisation", seemingly setting the bar lower than Washington for such a move, the reports said.

"(We) are in close consultations with the US on this field (formal declaration to end Korean War). And I know that there was (relevant) discussion at the North Korea-US summit level," Ms Kang said, referring to last week's meeting in Singapore between North Korean leader Kim Jong Un and US President Donald Trump, at a press conference to mark her first anniversary in office.

Mr Trump and Mr Kim signed a four-point joint statement on denuclearisation and improved relations between the two sides that had fought each other in the 1950-53 Korean War. But the agreement did not address ending the war.

The conflict finished in an armistice agreement, not a peace treaty, leaving the two Koreas technically at war.

Ms Kang described the declaration of an end to the war as the "entrance" to a process to establish a peace regime on the peninsula, reported Yonhap news agency.

She added, however, that Seoul can be flexible on the specific timing or format of an event for the largely symbolic proclamation.

"I think China could play a very important role in the overall process, and South Korea will have close consultations with China," she was quoted by Yonhap as saying.

President Moon Jae In's administration apparently hopes to have a ceremony to terminate the war at the border village of Panmunjom on July 27, the armistice agreement anniversary, Yonhap said.

Last week's Trump-Kim summit produced only a vague statement in which Mr Kim "reaffirmed his firm and unwavering commitment to complete denuclearisation of the Korean Peninsula". 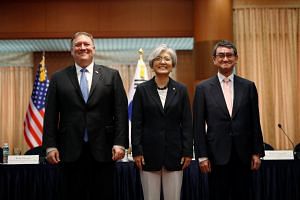 Amid fears the summit would weaken the international coalition against the North's nuclear programme, US Secretary of State Mike Pompeo stressed after the meeting that sanctions would remain in place until North Korea's complete denuclearisation.

But his South Korean counterpart suggested on Monday they could be eased sooner, reported Agence France-Presse.

"Our stance is that the sanctions must remain in place until North Korea takes meaningful, substantive steps towards denuclearisation," Ms Kang said according to AFP.

Seoul and Washington shared the same "big picture" view and would continue close consultations, she added.

The comments come just days after China's Foreign Ministry suggested that the UN Security Council could consider easing the economic punishment of its Cold War-era ally.

Any reduction in tensions on its doorstep is welcome for China, North Korea's closest ally, which accounts for around 90 per cent of Pyongyang's trade.

The same goes for Mr Moon, who supports engagement with North Korea and held his own summit with Mr Kim in April.

Until recently Mr Trump had pursued a "maximum pressure" campaign - with both China and South Korea on board - of tough rhetoric and tightened sanctions against Pyongyang.

But analysts say the Singapore summit has made it hard for the Trump administration to return to that policy even if its current diplomacy with North Korea proves to be a failure.

"The symbolism of the meeting ensures that the maximum pressure campaign has peaked," said Scott Snyder, senior fellow for Korea Studies at the US Council on Foreign Relations, in a commentary.

"In practice, China and South Korea will push for relaxation of economic pressure on North Korea," he added.

South Korea will closely monitor the expected high-level talks between the North and the US to follow up on the Singapore accord.

Mr Pompeo was quoted as telling Ms Kang that he will push for the negotiations "quite fast". They had a phone conversation earlier in the day, during which they reaffirmed the importance of the allies maintaining close coordination on next steps.

Seoul and Washington share the view that sanctions on the communist nation should remain in place until it takes "substantive" denuclearisation measures, according to the minister.

She expressed hope that she will hold separate talks with her North Korean counterpart, Mr Ri Yong Ho, on the sidelines of the Asean Regional Forum, which will take place in Singapore in early August.

On the proposed "hotline" between Mr Trump and Mr Kim, meanwhile, Ms Kang said it does not appear imminent.

Mr Pompeo said there's no concrete action yet on the matter, according to the minister.

"I can now call him," he said. "I gave him a very direct number. He can now call me if he has any difficulty. We have communication."

Mr Trump earlier presented a standard for the first-stage goal of the denuclearisation process, although South Korea's foreign minister would not clearly agree on the point.

"There will be a point at which, when you're 20 per cent through (the denuclearisation process), that you (North Korea) can't go back," Mr Trump said. "When you hit a certain point you can't go back."

Ms Kang said it's a matter to be further discussed by experts.