SEOUL (AFP, REUTERS) – North Korea’s leader Kim Jong Un understands that denuclearisation must happen “quickly”, US Secretary of State Mike Pompeo said on Thursday (June 14), warning there will be no sanctions relief for Pyongyang until the process is complete.

Pompeo said Washington remained committed to the “complete, verifiable and irreversible” denuclearisation of North Korea, after the joint statement from the US-North Korea summit in Singapore drew criticism for lack of detail on the key issue.

“We believe that Kim Jong Un understands the urgency... that we must do this quickly,” he said of the effort to have North Korea abandon its nuclear weapons.

Washington’s top diplomat is in Seoul to brief his South Korean and Japanese counterparts on Tuesday’s historic talks – the first between sitting leaders of the two countries – after which a triumphant President Donald Trump said the world can “sleep well”.

Following the summit, Trump said the US would halt its “provocative” joint military drills with South Korea as long as negotiations are ongoing with the North, an announcement that caught Seoul by surprise.

Pompeo is scheduled to fly to Beijing to meet his Chinese counterpart after the meetings in Seoul.

“There have been many analyses on the outcome of the summit, but I think what’s most important was that the people of the world, including those in the United States, Japan and Koreans, have all been able to escape the threat of war, nuclear weapons and missiles,” Moon told Pompeo ahead of the meeting between the two in Seoul. 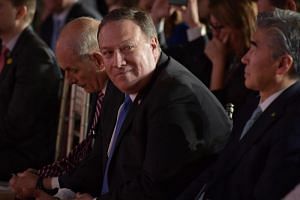 US aims for 'major' North Korea disarmament in 2½ years: Secretary of State Pompeo

Trump and Kim issued a joint statement after their historic meeting that reaffirmed the North’s commitment to “work towards complete denuclearisation of the Korean peninsula” and an end to joint US-South Korea military exercises, and gave US guarantees of security to North Korea.

But the summit statement provided no details on when Pyongyang would give up its nuclear weapons programme or how the dismantling might be verified.

Sceptics of how much the meeting achieved pointed to the North Korean leadership’s long-held view that nuclear weapons are a bulwark against what it fears are US plans to overthrow it and unite the Korean peninsula.

“I am confident that we took a very good, significant step in Singapore,” Pompeo told Moon ahead of the trilateral meeting that included Japanese Foreign Minister Kono.

Pompeo insisted after the meeting that Pyongyang was committed to giving up its nuclear arsenal, but said it would “be a process, not an easy one”.

Chairman Kim Jong Un of North Korea's State Affairs Commission understood that getting rid of his nuclear arsenal needed to be done quickly and there would be relief from stringent UN sanctions on North Korea only after its “complete denuclearisation”, Pompeo said.

Pompeo said a day earlier that he would like to accomplish major nuclear disarmament in North Korea within Trump’s current term.

“Absolutely... you used the term 'major', 'major disarmament', something like that? We’re hopeful that we can achieve that in the 2½ years,” he said.

Pompeo, who is charged by Trump with leading follow-on negotiations, bristled at a question about why the words“verifiable” and “irreversible” were not used in the summit joint statement in the context of denuclearisation.

“It’s in the statement. You’re just wrong about that... Because 'complete' encompasses 'verifiable' and 'irreversible'. I suppose you could argue semantics, but let me assure you that it’s in the document,” Pompeo said on Wednesday.

Trilateral cooperation among US, #ROK & #Japan has been crucial to the effectiveness of our efforts regarding #DPRK We commit to continue working together @moonriver365 #alliesfriendspartners @MOFAkr_eng pic.twitter.com/S8DnjWYztg

Tokyo has reacted with concern at Trump’s plans to cancel military exercises with South Korea, saying such drills are vital for East Asian security.

Two North Korean missiles flew over Japan last year as Pyongyang made rapid advances in its programme to develop a missile capable of striking the US mainland with a nuclear warhead.

Tokyo is working on arranging a meeting between Prime Minister Shinzo Abe and Kim, and is mooting a visit by Abe to Pyongyang around August, the Yomiuri newspaper reported.

A government source familiar with the matter told Reuters that Japanese officials planned to discuss the summit meeting with North Korean officials at an international conference on North-east Asian security to be held in Mongolia on Thursday and Friday.

Despite Trump's and Moon’s assertions about the North Korean nuclear threat being over, a senior US official responsible for studying the North Korean military said the US intelligence assessment of the nuclear and other military threat posed by North Korea to US and allied forces in Asia and the north-west Pacific remained unchanged.

US officials said it was unclear what types of training involving US and South Korean troops might cross into Trump’s now forbidden zone of “war games”.

But big, joint US-South Korea exercises appeared off limits under the new guidance.

"Make no mistake, we are going to maintain the readiness of our forces in South Korea,” said one US official, speaking on condition of anonymity. The official acknowledged, however, that it was still not certain how that was going to happen.

The US maintains about 28,500 soldiers in South Korea, which remains in a technical state of war with the North after the 1950-53 Korean War ended in a truce rather than a peace treaty.