They have threatened civil disobedience and a siege of government offices if she does not respond to their demands by 5pm on Thursday.

A message circulating on social media demanded Mrs Lam completely scrap the Bill, withdraw characterisation of the protests against it as a "riot", release those arrested following violence on the streets on June 12 and to drop all charges against them.

The Hong Kong Federation of Students said that if the demands were not met, protesters should surround government offices in Admiralty on Friday and initiate other acts of protests like delaying metro services.

"Calling for a self-initiated civil disobedience movement is so far what we student unions have consensus on. We will announce the details later," said Mr Joey Siu of the City University Students Union, public broadcaster RTHK reported.

Opposition came to a head on June 12 when thousands surrounded the city's legislature to prevent lawmakers from discussing the Bill, but this quickly escalated into violence, with police firing tear gas and rubber bullets to disperse protesters.

More than 80 people were injured, including law enforcement officers, and 32 others arrested. Eight of those arrested were released unconditionally on Tuesday. 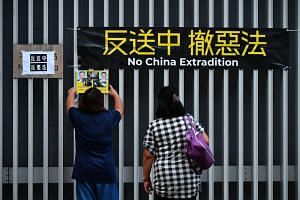 From homework to helmets, Hong Kong's protesters evolve and harden

But anger persists, with many accusing law enforcement officers of being heavy-handed against unarmed protesters.

The Civil Human Rights Front, which organised massive protests over the past two weekends, said it would be making an official police complaint about the matter on Friday.

A rally against the Bill as well as to demand for Mrs Lam's resignation has been planned for July 1, the anniversary of Hong Kong's handover to China and traditionally a day for the city's residents to take to the streets.

"We will lend our support to the various groups that have organised activities protesting this Bill," CHRF convenor Jimmy Sham told reporters outside the Legislative Council on Wednesday afternoon.

Asked if the group would join in the "escalation" and "civil disobedience" threatened by students, Mr Sham replied that CHRF would need to find out more before making any commitments, but he added that all peaceful protest activities had its support.

The Chief Executive on Tuesday reiterated that the divisive Bill had been suspended and she promised not to re-table it. Mrs Lam also apologised to Hong Kongers for a second time after massive protests over the weekends.

Organisers said millions turned out, although police put the figure at 340,000 at most.

Defying the calls to step down for her mishandling of the issue, Mrs Lam said that she was committed to serving out her five-year term and adopted a conciliatory tone with the young people who have been at the forefront of the recent protests.

Protest organisers, however, dismissed her apology, accusing her instead of simply repeating herself and not taking concrete action.

A handful of protesters have remained outside the government offices in Admiralty, insisting they will not leave until Mrs Lam responds to their demands.

The extradition Bill would have allowed for fugitives to be handed over to several jurisdictions, including mainland China. But many people in Hong Kong say China's legal system is opaque and there is concern that political dissidents and activists could be targeted under the Bill.

The Hong Kong government has said the aim is to prevent the city from becoming a haven for international fugitives, and that the law has safeguards.