BEIJING - The move by the United States to impose heightened tariffs on Chinese goods means the likelihood of both sides reaching a deal at the latest round of trade talks has all but evaporated, Chinese analysts said on Friday (May 10).

The question on their minds now is whether both sides would continue to have subsequent rounds of discussion after the current one.

The US raised tariffs on US$200 billion (S$272 billion) worth of Chinese imports, from 10 per cent to 25 per cent on Friday. It brings to an end the trade war truce brokered by Presidents Donald Trump and Xi Jinping in December last year.

Minutes after the tariffs kicked in, China's Commerce Ministry said in a statement published on its website that it "deeply regrets" the latest course of action by the US, adding that it is now forced to take necessary countermeasures, without specifying what these are.

It also indicated that Beijing hopes both sides would meet halfway in the current round of talks, and "put in effort to solve problems through cooperation and consultation".

Foreign Ministry spokesman Geng Shuang said during a regular press briefing on Friday that stable bilateral ties were in both parties' interests and called on the Americans to work with China on this front.

Vice-Premier Liu He, China's top trade negotiator, had arrived in Washington for the 11th round of trade negotiations on Thursday. 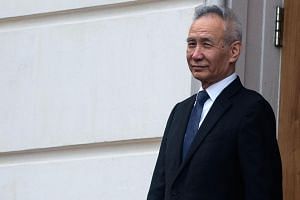 Until Mr Trump announced on Twitter earlier this week that he would increase tariffs because Beijing had reneged on earlier commitments, hopes were high that both sides would reach a deal this time.

Instead, the trade war that has battered financial markets and resulted in tariffs levied on billions of dollars of goods from both sides looks set to continue.

Observers say with the new tariffs in effect, China is now unlikely to want to reach a deal as this could be seen as capitulation.

Mr Hu Xijin, the editor-in-chief of China's nationalist Global Times tabloid, said in a post on Chinese social media platform Weibo on Friday that the US had carefully timed the tariffs to coincide with the trade talks to shock China and sap its determination.

"But China has rich experience in negotiating while under pressure," said Mr Hu, adding that the US election timetable will make the Trump administration more desperate for a deal as time passes.

Among American demands that China reportedly backtracked on were commitments to amend laws to address US complaints. This was something the China's domestic crowd would see as a humiliation, said Professor Wang Yiwei from the China Council for the Promotion of International Trade.

"It's very hard for something like this to be accepted back in China," said Prof Wang, adding that the fresh round of tariffs mean Beijing would now be loath to make concessions that make it appear weak.

Professor Su Hao of the China Foreign Affairs University also said that by raising tariffs, the US has "fundamentally destroyed" the basis for negotiations between both parties.

"It is going to create a lot of uncertainty for the next step of negotiations," he said.