HONG KONG - Hong Kong descended into chaos as several strikes and protests crippled traffic across the city on Monday (Aug 5), forcing flight cancellations in the financial hub amid a dire warning from Chief Executive Carrie Lam that the recent spate of civil disobedience has put the territory on edge.

Officers in riot gear spent most of the day battling with protesters in at least 10 different areas, volleying multiple rounds of tear gas to disperse protesters who had either surrounded police stations or built barricades on roads.

This is possibly the largest-scale act of civil disobedience since mass protests against a controversial extradition Bill began in early June. Hundreds of thousands heeded a call to industrial action, with many businesses either closed for the day or running on skeletal staff.

Earlier in the day, police fired several volleys of tear gas at black-clad protesters who had gathered at multiple locations in the afternoon. Hundreds of protesters at Tamar Park in Admiralty, Wong Tai Sin, Tin Shui Wai and Tai Po were sent fleeing in all directions after police fired rounds of tear gas to disperse them.

Some protesters also attempted to overtake roads in the Jordan-Yau Ma Tei area, Tuen Mun, Sha Tin and Tsuen Wan, according to a Telegram chat alert.

Operations at the Hong Kong International Airport, meanwhile, were severely disrupted as around a hundred anti-extradition Bill protesters held a demonstration there to protest against the government, and in support of the city-wide strike. They held up signs about the ongoing protests in a bid to reach international visitors.

Deputy Director-General of Civil Aviation Raymond Ng said 77 flights have been cancelled, RTHK reported. No further details were given.

China urged the United States on Monday to stop interfering in Hong Kong’s affairs, and said it firmly stands behind the one country, two systems. The Foreign Ministry said in a statement that no one should underestimate China’s resolve to safeguard the stability of Hong Kong, Reuters reported. Senior Police Superintendent Kong Wing Cheung told reporters at a daily briefing on Monday that he personally believes there is no chance of a deployment of the People’s Liberation Army, adding that the police force has the full support of the government.

Separately, officials from the Hong Kong and Macau Affairs Office of the State Council will speak to the media on Tuesday in Beijing about the “current situation in Hong Kong”. This is the second time China is holding a press conference after a rare media event last week in which it threw its support behind the Hong Kong government.

Fighting broke out in a Hong Kong neighbourhood between protesters and a mob of men wielding long wooden poles, the Associated Press reported. The men swung and threw their poles at the demonstrators, with the latter responding by throwing traffic cones, metal barricades and rods of their own.

BREAKING - Fighting has broken out at North Point between Protesters and local residents. #HongKongProtests #HongKong pic.twitter.com/6MarDFjeAP

In North Point, besides blocking traffic and taking over roads,  some residents threw bottles at protesters who were walking on the road. Triads meanwhile surfaced in the area but the demonstrators streamed out to the police station and repeated their tactics, provoking police into firing rounds of tear gas before a group evacuated to head back to Causeway Bay.

At Tin Shui Wai Police Station, riot police fired rounds of tear gas at protesters who had surrounded the building, scattering them. Some of the protesters had hurled stones at the station. But many remained a distance away, chanting "hark seh wui" - Cantonese for triads.

In Wong Tai Sin, protesters holding umbrellas took over Lung Cheong Road by setting up barricades with metal fences. As the riot police approached to clear the crowd, many of them hurled objects at the officers and shouted "hark seh wui" at them. The police then fired rounds of tear gas at the protesters, sending them fleeing in all directions.

In the central business district of Admiralty, hundreds of protesters at Tamar Park, near Hong Kong's legislative complex, chanted “restore Hong Kong, time for revolution". They were also giving out pamphlets that read: “No extraditions to China; strike work, strike school and strike market."

Harcourt Road, a main thoroughfare in the area, was also occupied by protesters. Police then moved in and fired multiple rounds of tear gas in an attempt to disperse them.

Police stations in a number of locations - Tsuen Wan, Wong Tai Sin and Sha Tin - have suspended their report room services due to the protests.

Meanwhile, clashes broke out in Yuen Long in the morning when a motorist tried to drive through a barricade set up by protesters, public broadcaster RTHK reported.

The driver had got out of his car when he could not get through a section of Castle Peak Road. The protesters then smashed the windscreen of his car and sprayed paint on the vehicle. The driver managed to get back into his car and drove right past the barricade, said RTHK.

The multiple protests came as travel chaos hit the financial hub, with more than 230 flights to destinations around Asia cancelled on Monday and air traffic controllers joining a citywide strike. Some flights for Tuesday were also cancelled.

Train services on most lines were suspended during the morning rush hour as protesters obstructed the doors of trains, preventing them from leaving the platforms. All train services resumed by 12.45pm.

At an inter-government department press conference on Monday afternoon, Transport and Housing Secretary Frank Chan Fan said the government was taking proactive steps to sort out the current political crisis, denying that they had played down the extent of Monday’s strikes.

“We’ve taken preemptive action to mitigate the effects of the action,” he said.

“We’ve been making our best endeavour to maintain operational smoothness in the airport and so far it’s been smooth,” he said, referring to the hundreds of cancelled flights in the regional air hub.

A total of 2,300 aviation workers have also joined the strike, organisers say.

In the airport, staff in the transit area said business has been quiet on Monday after hundreds of flights were cancelled. "Usually our afternoons are busy but today, it's so quiet. You see how many of us are standing around?" a shop assistant who gave her name only as Kelly, told The Straits Times.

At the same press conference, Deputy Chief Fire Officer Cheng Sui On called on protesters to refrain from making homemade explosives and to stop committing arson on the city’s densely built-up streets, saying that a fire could be catastrophic.

On Monday, the police said that 420 people have been arrested since June 9. Aged 14 to 76, the suspects were arrested for offences including illegal assembly, assaulting police and rioting.

Police have fired 160 rubber bullets, 150 foam bullets and more than 1,000 rounds of tear gas since June 9, during operations to disperse protesters.

The protests on Monday follow a weekend of violent clashes between protesters and the police in several areas, as months of demonstrations against a controversial extradition Bill escalated.

Hong Kong shares were hit hardest in Asia as protesters moved to shut down the financial hub in widening social unrest, Bloomberg reported. The MSCI Hong Kong Index closed down 3.2 per cent on a ninth day of declines, matching the longest streak since the 1997 handover.

Landlords, retail stocks and casinos once again bore the brunt of the selling as protesters sought to shut down the city with a general strike. The sinking Chinese currency did not help either, with its plunge past 7 per US dollar escalating concerns about the US-China trade war. 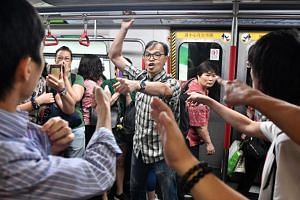 Hong Kong has been mired in a ballooning political crisis triggered by chief executive Carrie Lam's push for a highly unpopular extradition Bill that critics said would have allowed the city to send suspects to mainland China which has an opaque legal system.

Months of protests have resulted in falling tourist numbers and slumping hotel occupancy rates, adding pressure to the economy.

The purchasing managers’ index plunged from 47.9 in June to 43.8 in July - the lowest reading since March 2009, as output and new orders both fell, Bloomberg reported, quoting IHS Markit. A reading below 50 signals contraction.

The data signals weaker confidence in the local economy as protests continue to weigh on tourism and retail sales, aggravated further by the ongoing US-China trade war.

“I would not be surprised if we see a technical recession - two consecutive quarters of contraction," Mr Raymond Yeung, chief China economist at ANZ, told Reuters. "That is highly probable now."