TOKYO/SEOUL (REUTERS) - North Korea launched two ballistic missiles into the sea near Japan on Thursday (March 25), Japan’s prime minister said, fuelling tensions ahead of the Tokyo Olympics and ramping up pressure on the new Biden administration in Washington.

United Nations Security Council resolutions ban North Korea from testing ballistic missiles and if the launch is confirmed, it would represent a new challenge to President Joe Biden’s efforts to engage with Pyongyang.

The missile launches highlight the threat North Korea’s illicit weapons programme poses to its neighbours and the international community, the United States military’s Indo-Pacific Command said in a statement on Thursday.

The command said it was monitoring the situation and consulting with allies.

Japan lodged a formal protest through its embassy in China and said the test threatened peace and safety in the region, while South Korea’s National Security Council expressed deep concern.

Japan’s coastguard said the first missile was detected soon after 7am local time and flew about 420km, followed by a second missile 20 minutes later that flew about 430km, indicating the missiles were short-range weapons.

North Korea has previously test-fired missiles over Japan that were able to carry nuclear warheads and reach anywhere in the United States.

“The first launch in just less than a year represents a threat to peace and stability in Japan and the region and violates UN resolutions,” Japanese Prime Minister Yoshihide Suga said in comments aired by public broadcaster NHK.

The launches coincided with the start of the Olympic torch relay in Japan on Thursday, beginning a four-month countdown to the summer Games in Tokyo which were delayed from 2020 due to the pandemic.

Mr Suga said he would ensure a safe and secure Olympics and “thoroughly discuss” North Korea issues, including the launches, with Mr Biden during his visit to Washington next month.

South Korean and US intelligence authorities were analysing the data of the launch for additional information, the JCS said in a statement.

Japan’s coast guard warned ships against coming close to any fallen objects and asked them to provide information to the coast guard.

North Korea has not tested a nuclear weapon or its longest-range intercontinental ballistic missiles (ICBMs) since 2017, ahead of an historic meeting between leader Kim Jong Un and then US president Donald Trump in 2018.

US officials confirmed North Korea carried out a new projectile launch, without offering details on the number or kind of projectile detected.

There was no official comment from the White House or State Department.

The Biden administration is in the “final stages” of reviewing its North Korea policy, senior US officials told Reuters this week.

Analysts have noted a change in wording from the previous administration, emphasising the “denuclearisation of North Korea”, rather than the whole peninsula – a more unilateral position likely to be anathema to Pyongyang.

Professor Leif-Eric Easley from Ewha University in Seoul said the North Korea policy review would come within the context of the administration’s strategy on China, North Korea’s only major ally.

“North Korea’s military activities after reaffirming ties with Beijing raise questions about how China is complicit in sanctions evasion and may be enabling the Kim regime’s threats to the region.

This will increase calls in the US and elsewhere to sanction Chinese firms involved in illicit trade,” he said.

Over the weekend, North Korea fired two short-range cruise missiles, US and South Korean officials said, but Mr Biden played down the those tests as “business as usual” and officials in Washington said they were still open to dialogue with Pyongyang.

Even short-range ballistic missile tests would be a “step up” from the weekend test, and allow North Korea to improve its technology, send a proportionate response to US-South Korea military drills, and signal to the US that it is improving its arsenal, said Mr Vipin Narang, a nuclear affairs expert at the Massachusetts Institute of Technology in the United States.

The test launches should not torpedo diplomatic efforts, but they are a reminder of the cost of the failure to secure a deal with Pyongyang, he said.

“Every day that passes without a deal that tries to reduce the risks posed by North Korea’s nuclear and missile arsenal is a day that it gets bigger and badder,” Mr Narang said.

Mr Biden’s diplomatic overtures to North Korea have gone unanswered, and Pyongyang said it would not engage until Washington dropped hostile policies, including carrying out military drills with South Korea.

US says it is working with S. Korea and Japan on coordinated approach towards N. Korea

North Korea has continued to develop its nuclear and missile programs throughout 2020 in violation of UN sanctions dating back to 2006, helping fund them with about US$300 million (S$403 million) stolen through cyber hacks, according to independent UN sanctions monitors.

North Korea has not tested a nuclear weapon or its longest-range intercontinental ballistic missiles (ICBMs) since 2017.

In early 2018 North Korea announced a moratorium on testing nuclear weapons and ICBMs, though it says it no longer feels bound by that.

It has tested a number of new short-range missiles that can threaten South Korea and the 28,500 US troops stationed there, most recently in March 2020.

Denuclearisation of what? US switch on North Korea wording raises debate 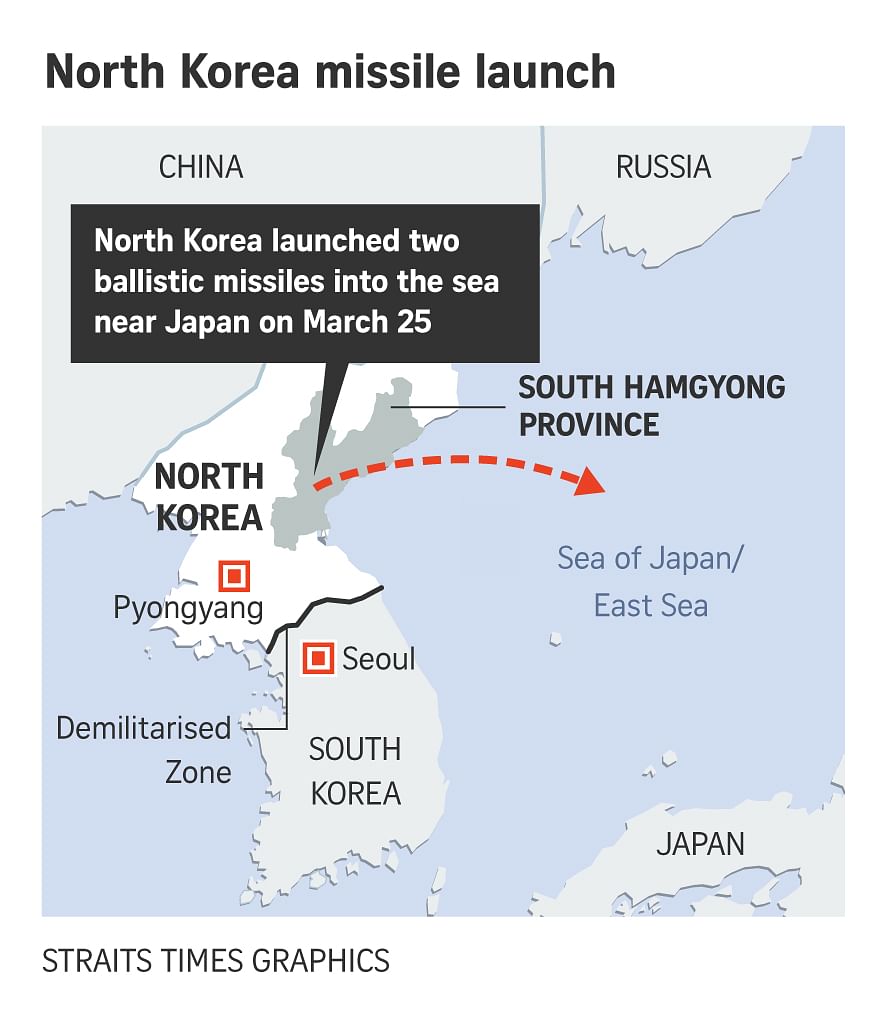