TOKYO - There is growing doubt in Japan over Prime Minister Shinzo Abe's foreign policy, a poll released on Tuesday (Nov 13) has found.

The survey done by the United States-based Pew Research Centre, which polled 1,016 Japanese citizens between May 24 and June 19, found that nearly one in two lacks confidence in Mr Abe to "do the right thing in world affairs".

Support for Mr Abe's foreign policy is now at its lowest at 48 per cent, according to the poll, from a peak of 62 per cent in 2015.

The findings come as Mr Abe hosted a visit by US Vice-President Mike Pence in Tokyo on Tuesday, before the two leaders attend high-level regional meetings in Singapore and Papua New Guinea. Mr Abe will also be visiting Darwin in Australia, to attend a World War II memorial.

Since becoming Prime Minister in 2012, Mr Abe has been actively seeking to build friendships with like-minded countries and regions.

He has tried to build personal rapport with US President Donald Trump and with Russian President Vladimir Putin, in the hopes of achieving a breakthrough in the territorial spat over the Northern Territories/Southern Kuril islands.

However, the drop in support for his foreign policy underlines how these efforts have not borne fruit. 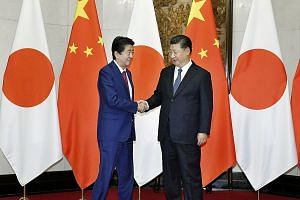 Speaking Of Asia: Abe moves Japan out of harm's way

The survey also found that Japan is viewed favourably generally in the Asia-Pacific countries surveyed as well as the US, and the people of several countries also expressed a high level of confidence in Mr Abe's foreign policy, including the Philippines (72 per cent), Australia (68 per cent) and the US (57 per cent).

But this was not the case when it comes to South Korea, where feelings of acrimony continue to run high over Japan's wartime atrocities and only 10 per cent are confident about Mr Abe's foreign policy.

Meanwhile, Japanese views towards the US and China have slightly recovered from last year, though there is still overwhelming belief (71 per cent) that the US is acting unilaterally without taking into account the concerns of Japan, its long-time security ally.

The threat of a full-blown trade war between the US and China has nudged Asia's two largest economies together, and Japanese opinion on China has improved to 17 per cent - up from a low of 5 per cent in 2013.

Eight in 10 Japanese believe China plays a more important role in the world today as compared to 10 years ago - though two in three see this power and influence as a major threat.

The survey was also an admonition against Japanese democracy. The Japanese believe that elections do not change anything (62 per cent), that elected officials do not care what ordinary people think (62 per cent), and that most politicians are corrupt (53 per cent). Only four in 10 are satisfied that democracy is working in Japan - down from 50 per cent last year.

In Japan, the former main opposition Democratic Party has splintered into different parties, while Mr Abe has faced allegations of cronyism.

The Pew survey also found that many see the economy as improving under Mr Abe's watch, though a majority see a bleak future as they are fearful that robots will steal their jobs.

More than eight in 10 believe automation will lead to worse income inequality, while nearly three-quarters think ordinary people will have a hard time finding jobs.

Japan's population of 126.7 million is expected to shrink by a third by a 2065, and the country is looking to automation to boost productivity and foreign workers to fill jobs in in-demand sectors such as nursing and construction.

The LDP has sought to loosen immigration restrictions in a Bill tabled in Parliament this month. The Pew survey - along with several Japanese media opinion polls - have shown that citizens are split on whether to allow more foreigners into the country.