TOKYO – US Vice President Mike Pence on Tuesday (Nov 13) reaffirmed the need to work with Japan to maintain the sanctions campaign on North Korea until its denuclearisation, while also keeping up pressure on Tokyo to reduce its trade surplus with the United States.

The Vice President's remarks on North Korea, made in Tokyo with Japanese Prime Minister Shinzo Abe beside him, came a day after a report by a US think-tank, Center for Strategic and International Studies, showed that Pyongyang was secretly moving ahead with its ballistic missile program with 16 hidden bases.

South Korea’s presidential office on Tuesday sought to play down the think-tank’s report, saying that the information was “not new” and that the New York Times had gone too far in labelling the North’s continued activity as a “great deception”.

“The sanctions will remain in full force until we achieve the final, fully-verified denuclearisation of North Korea,” Mr Pence said. “The United States, Japan and the world will accept nothing less.”

The denuclearisation process is at a crossroads amid pushback from China, Russia and South Korea on the question of sanctions. All three have now called for a gradual easing of sanctions, saying they are not constructive towards denuclearisation since US President Donald Trump met North Korean leader Kim Jong Un in Singapore in June. 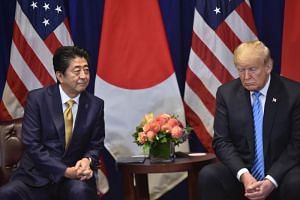 A planned meeting between US Secretary of State Mike Pompeo and North Korean officials in New York on Nov 8  was cancelled without any given reason. South Korea’s unification minister Cho Myoung-gyon departed Seoul on Tuesday for a five-day visit to the US.

Mr Abe, on his part, said: “North Korea has its own abundant resources and diligent workforce, and its denuclearisation will herald the dawn of a bright future. And on the premise of resolving the various problems, Japan and the US will continue to work together.”

Japan was Mr Pence’s first stop on a four-country tour of the region, which also takes him to Singapore and Papua New Guinea where he, along with Mr Abe, will attend multilateral meetings held in conjunction with the Asean and Apec summits.

The two leaders will also make a brief stopover in Australia after the Singapore leg.

On the issue of trade, Mr Pence said the US was looking forward to ironing out a bilateral deal with Japan, with an eye on slashing Japan’s trade surplus of US$68.9 billion ($95.3b). Talks are due to begin in January.

“The US has had a trade imbalance with Japan for too long,” Mr Pence said. “American products and services too often face barriers to compete fairly in Japanese markets. The best opportunity for free, fair and reciprocal trade will come in a bilateral trade agreement.”

Japan has said that the new Trade Agreement on Goods will be limited in scope, and that it will not consider any terms that are “detrimental to national interest”, nor any terms that go beyond what was agreed under the Trans-Pacific Partnership (TPP) deal that Mr Trump abandoned in his first act in office.

Mr Abe, speaking before Mr Pence, told the news conference that Japan will work with the US to “further expand bilateral trade and investment in a mutually beneficial manner.”

He also said he discussed the outcomes of his landmark visit to Beijing last month with Mr Pence, and that Japan and the US will cooperate to ensure constructive dialogue with China.

Meanwhile, the two leaders pledged to uphold their vision of a Free and Open Indo-Pacific, which Mr Abe described as one “where big and small countries can participate and all countries can flourish”.

The US, Japan, along with Australia, are reportedly teaming up to finance infrastructure in such areas as energy and digital connectivity, from liquefied natural gas terminals to undersea cables.

The US and Japan on Tuesday pledged to jointly earmark up to US$70 billion in support of the endeavour, which Mr Abe said showed their joint commitment to the “economic development of the Indo-Pacific region that is free, open and based on fair rules”.