BEIJING (NYTIMES) - President Xi Jinping of China called for the Chinese people to "start again" and begin a modern "long march," invoking a turning point in Communist Party history as the country braces for a protracted trade war with the United States.

"Now there is a new long march, and we should make a new start," Mr Xi told a cheering crowd on Monday (May 20) in Jiangxi province as he started a domestic tour that is seen as an attempt to rally the nation as trade tensions with the United States escalate.

Mr Xi was accompanied by his top trade negotiator Liu He as he made the remarks at the historic site of the start of Mao Zedong's Long March of 1934. The Long March was a 6,000-km long military retreat by the Red Army, the forerunner of the People's Liberation Army,  that took more than a year and would ultimately lead to the ousting of the Kuomintang nationalists 15 years later.

While Mr Xi did not mention the trade war in his comments, they are the strongest signal yet that Beijing has abandoned hopes of a deal with the United States on the issue in the near term. Prospects of a deal faded this month when talks broke down between negotiators for the two sides and President Donald Trump accused China of breaking terms that had already been settled.

The Chinese state media has ratcheted up nationalistic rhetoric in the last few days, comparing the trade war to the Korean War, during which Chinese troops were in direct combat with US forces.

Over the weekend China's national movie channel, CCTV-6, ran back-to-back films about the Korean War, saying that the footage was "echoing present times." The takeaway from these films for many Chinese is that "there's no equal negotiation without fighting," Mr Hu Xijin, the editor of Global Times, a newspaper owned by the Communist Party, wrote on Twitter.

For months before the trade talks broke down, the Chinese state media had been more subdued, at times even delaying news of the worsening tensions. When Mr Trump first indicated that he would increase tariffs to 25 per cent from 10 per cent on US$200 billion (S$276 billion) in Chinese goods - and the stock markets swooned in response - there was hardly any mention of the threat in China, where the internet and other media are censored. 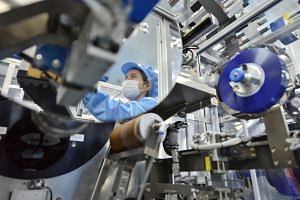 But after talks broke down between both sides, Chinese state media outlets changed their tone, saying that while China was prepared to resolve differences through negotiations, if the United States chose to fight, "we will fight to the end."

One of Mr Xi's first visits on his tour was to a rare earths mine in Ganzhou, which some observers saw as an attempt to remind Mr Trump of the leverage that China has when it comes to certain resources that the United States, and the rest of the world, depend on.

Rare earths are found in most of the electronics that the world uses every day, and China is the largest source of the minerals. China has used its control of rare earths to exert pressure before, most notably in 2010 when it halted all exports to Japan for two months over a territorial dispute.