WASHINGTON (CHINA DAILY/ASIA NEWS NETWORK) - The United States' escalation of trade tensions with China, compounded by newly enacted and threatened additional tariffs on Chinese imports, could come with a political price by hitting the US economy and employment, so the Trump administration should "reverse course", said some experts and executives.

As the tariffs rise, so does the economic impact, according to Ms Nicole Kaeding, vice-president of federal and special projects at the Washington-based Tax Foundation.

She said the new tariffs by the Trump administration represent a US$70 billion (S$96 billion) a year tax increase on consumers in the US, resulting in higher prices for a number of items.

"The tariffs, if kept in place, will reduce the size of the US economy and reduce employment," Ms Kaeding said. "Hopefully, the administration reverses course and removes the tariffs, and the Chinese government does the same thing."

Unlike the first several rounds of tariffs, which focused more on industrial and agricultural products, the recently threatened 25 per cent tariffs on roughly US$300 billion worth of Chinese imports concern mostly consumer products including toys, clothing, furniture and footwear.

Mr Gary Hufbauer, a senior fellow and trade expert at the Peterson Institute for International Economics in Washington, said he estimated that US tariffs to date, including the latest increase to 25 per cent from 10 per cent on US$200 billion of Chinese imports, will cost a US household of three around US$1,000 a year.

The further threatened escalation on US$300 billion worth of Chinese goods would raise that cost to US$2,200 annually, he said. 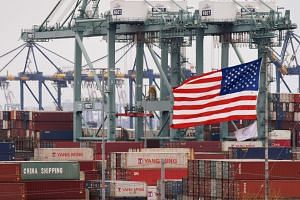 "At some point, consumers will notice higher prices on imported products, small firms reliant on crucial intermediate imports will shed workers and US exporters will lose sales. All these effects will have a political price," Mr Hufbauer said.

His comments echo those of a study in February by Trade Partnership, which estimated that imposing tariffs of 25 percent on all remaining imports from China, combined with the impact of retaliation, would jeopardise more than two million US jobs and reduce the US gross domestic product by 1 per cent.

"Further escalation would be counterproductive. It would simply ensure an economic cold war between the US and China, at least until January 2021 and perhaps much longer," he said. "This would be a 'lose, lose, lose' proposition."

Beijing has made its stance on the trade spat clear to Washington: "If you want to talk, the door is open; if you want to fight, we will fight to the finish", according to a statement aired by China Central Television on May 13.

Mr Hufbauer said he expected many meetings next month to defuse the escalation, which he called "very bad" for both countries and the global economy.

Professor of political science Cal Jillson, from the Southern Methodist University in Dallas, said the trade struggle could be a protracted one.

Prof Jillson noted that US President Donald Trump had moved to alleviate some of the pain being experienced by US farmers and manufacturers.

"But with the 2020 presidential election coming up, he will be alert to any loss of support among constituencies he feels he needs for reelection," Prof Jillson said.

Mr Trump is betting that an increase in consumer prices would not sour voters amid strong economic growth and the lowest unemployment rate in 50 years. But price hikes could complicate things for Mr Trump as the 2020 campaign picks up, The Hill.com, a political news website, reported last Friday.

"We know that employment is good now. But if companies are forced to lay off employees, that would turn the economy in the other direction," Mr Ed Weinstein, vice-president of tax and government affairs for retail chain Jo-Ann Fabric, was quoted by the website as saying.

"At 25 per cent, we will need to pass on the pricing to our consumers... The increased pricing could lead to reduced profit, which could lead to store closings and employee layoffs," Mr Weinstein said.