SHANGHAI (REUTERS) - Shares in rare earth-related companies have soared, led by jumps in Chinese producers after Chinese President Xi Jinping visited a rare earth firm in southern China, sparking speculation the sector could be the next front in the Sino-US trade war.

China accounted for 80 per cent of the rare earths, a group of 17 chemical elements used in high-technology consumer electronics and military equipment, imported by the US from 2014 to 2017.

So far, China's rare earths exports have been spared from recent tariffs by the United States, which has decided not to impose import duties on those and some other critical minerals from China as part of the trade war.

Beijing, however, has raised tariffs on imports of US rare earth metal ores from 10 per cent to 25 per cent from June 1, making it less economical to process the material in China.

Analysts said that Mr Xi's visit might indicate China is considering using rare earths as a weapon in the trade war, which provided support for the shares of the Chinese firms.

"No question it's sabre rattling," said Mr Ryan Castilloux, managing director of Adamas Intelligence, a consultancy that tracks the rare earths market. "I think China would be reluctant to cut off supplies to anyone just yet, but the optics are designed to send a clear message - we know your vulnerabilities." 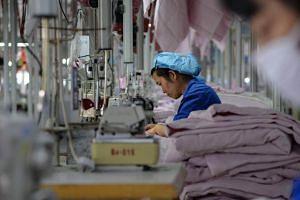 US-China trade war: Will tech world of the future look like the past?

Shares in JL MAG Rare-Earth Co Ltd surged the maximum limit of 10 per cent on Monday following Mr Xi's visit, and rose another 10 per cent on Tuesday.

Shares in Innuovo Technology Co Ltd, a rare-earth permanent magnetic materials and products maker, also soared 10 per cent to their highest since October 2017. The firm's shares have gained 54.7 per cent so far in May.

The gains were not exclusive to China-based producers.

Asked if China would consider limiting rare earth exports to retaliate against the United States, China's foreign ministry spokesman Lu Kang said on Monday that Mrr Xi's visit was normal and there was no need for over-interpretation.

Limiting rare earth exports to the United States would have an impact as US consumption relies on China, said brokerage Pacific Securities.

However, RBC Capital Markets warned a Chinese ban could backfire by prompting the start-up of rare earths production from other countries, breaking China's hold on the market.

"Should China hike prices for the US or shut it out completely, it would simply speed up that process, leading to rapid development of alternative supplies," it said. "Brazil, Vietnam, Russia, India and Australia currently stand out as key beneficiaries by having the world's largest reserves and production."