BEIJING - China will put on a massive parade of its most advanced weapons next week in a display of its indigenous military capabilities, the Defence Ministry said on Tuesday (Sept 24).

The People's Republic is celebrating 70 years of its founding on Oct 1 and the parade, the largest ever to be staged, will take place in the heart of Beijing.

The Defence Ministry revealed more details about the show of military technology on Tuesday in a briefing, pointing out that the weapons on display would be "made in China" and already in service.

"They will include some new types of weapons in use in the Chinese military... They will reflect China's ability to independently research and develop weapon systems," said Major-General Tan Min, executive deputy director of the military parade joint command office.

About 15,000 military personnel, 160 aircraft and 580 different pieces of military hardware would make up the 59 formations of the 80-minute long parade, the Defence Ministry said.

For the past three weekends, during full dress rehearsals, tanks and other military hardware were seen rolling down Chang'an Avenue, the main boulevard that passes through the centre of the capital.

Military observers are watching closely the hardware that China will trot out on Oct 1 for signs of how the country's military is developing.

China has embarked on reforming its armed forces in recent years in an effort to turn the People's Liberation Army into a modern fighting force - a strong military is a key part of Chinese President Xi Jinping's "Chinese dream".

Mr James Char, a Chinese military expert at Nanyang Technological University, said Beijing is now trying to "play down how its military industries continue to exploit foreign technologies" for some of its more advanced defence technology.

Defence Ministry spokesman, Senior Colonel Wu Qian, noted that China only had 17 aircraft at the military parade held to celebrate the founding of the People's Republic 70 years ago. This led then Chinese Premier Zhou Enlai to order each aircraft to fly twice over Chang'an Avenue. 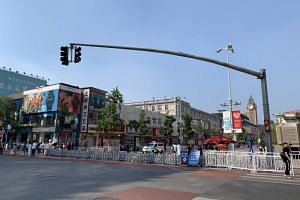 No kites, pigeon flying as China preps for 70th anniversary

"Now 70 years have passed, our country has grown stronger and more prosperous, we are no longer in shortage of aircraft participating in the parade," the spokesman said.

Senior Colonel Wu also took aim at criticism that China was using the opportunity to flex its military muscles at a time when it is grappling with external challenges, in particular deteriorating ties with the United States.

Col Wu said: "When we show to the public our armaments they will say we are flexing our muscles, otherwise they would blame us for not being transparent. In response to this strange logic, the thing to do is to stay committed to our own development."

But plans for a grand show of China's military prowess could be overshadowed.

The environment ministry warned in a statement published late on Monday that adverse weather conditions are expected to lead to heavy smog building up around Beijing over the next two weeks.

It urged local governments to pay close attention to smog and take action to reduce emissions.