BEIJING - China will put its military might on show in the biggest parade of its weaponry on Oct 1 when the country celebrates the 70th anniversary of the Chinese Communist Party taking power.

The occasion will be an opportunity for President Xi Jinping to flaunt his military modernisation efforts and send a message to the world, particularly the US, that it should not be trifled with.

The celebrations are set against a sobering backdrop of a deepening trade war with the US which has shaken the Chinese economy, and the worst political crisis in Hong Kong since it was handed over in 1997.

At a press conference on Thursday (Aug 29), General Cai Zhijun, deputy head in charge of organising the military parade, was quick to point out that the weaponry display "does not target any country or region and does not target any specific situation".

"The Chinese military has always been a staunch force for safeguarding world peace and regional stability," he said. "At the same time, we have the determination and ability to resolutely safeguard our national sovereignty, security and development interests."

While he would not confirm if made-in-China hardware such as the world's longest-range missile Dongfeng-41 would be showcased, the military parade will feature some advanced weapons for the first time, said Gen Cai.

President Xi is also slated to address the nation in what will be a keenly-watched speech that may provide clues to how he intends to navigate challenges from the trade war and unrest in Hong Kong to reunification with Taiwan. 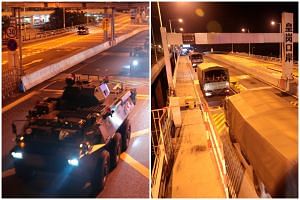 Other celebratory events include a fireworks show, commemorative stamps and coins, a musical and presentation of medals to honour those who have made contributions to China.

Since coming to power in 2012, President Xi, who also chairs the Central Military Commission, has prioritised the transformation of the People's Liberation Army into a world-class fighting force.

China is used to marking anniversaries with large military parades, including the biggest in 2015 commemorating the 70th anniversary of the end of World War II.

That show of force featured more than 12,000 troops marching through Beijing's Tiananmen Square, over 200 aircraft in a fly-past and 500 armoured vehicles.

Military expert Collin Koh of the Institute of Defence and Strategic Studies at the Nanyang Technological University said the type of weapons systems that China chooses to showcase will point to the signals it wants to send, not only to the US but also closer to home.

"On the one hand, China wants to showcase its military muscle and send a message to its adversaries, but on the other hand, it is trying not to be too showy. There will likely be some balance," said Dr Koh, adding that Beijing would not want to give ammunition to hawks in the Trump administration prone to fanning accusations of an arms race.

While there will be a display of strategic weapons, Dr Koh believes conventional weapons systems will likely be the dominant attraction.

"Taking into account what's happening in Hong Kong and tensions in the Taiwan Strait, the People's Liberation Army also needs to be shown to be ready to undertake conventional war-fighting operations."