SHANGHAI (REUTERS, BLOOMBERG, AFP) - A sixth person has died from pneumonia in the central Chinese city of Wuhan following the outbreak of a new coronavirus, authorities said on Tuesday (Jan 21) as the number of people in China infected by the Sars-like virus jumped to 291.

A total of 258 cases had been confirmed in Wuhan by the end of Monday, the city's mayor Zhou Xianwang said in an interview.

Separately, China’s eastern Zhejiang provincial health authority said a total of five cases were confirmed as of noon on Jan 21.

By the end of Monday, there were 291 confirmed cases, and over 900 people are still under medical observation, said the National Health Commission.

In a separate statement posted on its official Weibo account, the Wuhan Municipal Health Commission said 15 medical workers in the city had been diagnosed with pneumonia, with one other suspected case, confirming that there has been human-to-human transmission.

Of the infected staff, one was in critical condition, it added.

The World Health Organisation (WHO) confirmed that the new pathogen is being transmitted among humans, and not just from animals to humans as was originally hoped.

That puts the virus in a category similar to Severe Acute Respiratory Syndrome, or Sars, which killed almost 800 people 17 years ago. That ailment also represented a high risk to health-care workers.

“The risk from this virus causing pandemonium has increased because it is spreading from different countries, and we are now seeing that it can be more easily transmitted from person to person,” said Dr Sanjaya Senanayake, associate professor of medicine at the Australian National University.

Is the coronavirus outbreak on scale of Sars? | THE BIG STORY | The Straits Times

In comparison with Sars, he said, "the one good factor, I guess, at the moment seems to be the low mortality rate".

Asian shares fell as investors likened the outbreak to the 2002-2003 spread of Sars, another coronavirus that broke out in China.

China’s yuan was down nearly half a per cent and on track for its worst day in a month, while airline and travel stocks fell across the region.

"Because of Chinese New Year, millions of people will make a move to their home towns across China, which is making the whole situation uncontrollable," said Ms Margaret Yang, an analyst at brokerage CMC Markets in Singapore, referring to the Chinese holiday period which formally begins on Friday.

"The sell-off is just the beginning; we will see more in days to come."

The outbreak, which began in Wuhan, has spread to more Chinese cities, including the capital Beijing and Shanghai, and five cases have been reported outside mainland China, in South Korea, Thailand, Japan and Taiwan. 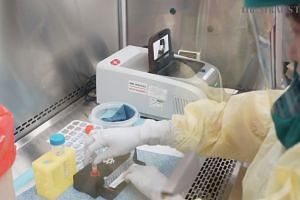 Wuhan virus and Sars are as different as cats and dogs, researchers say

Taiwan on Tuesday reported its first confirmed case of the new coronavirus as the government warned the public against travelling to Wuhan.

The number of cases in China surged over the weekend as health authorities worldwide increased testing for the virus, which causes symptoms that include fever and coughing.

With the Chinese New Year just days away – a holiday season during which the nation’s citizens rack up three billion trips across the country to reunite with family – the spread of the virus could intensify.

"The outbreak of a Sars-like coronavirus in Wuhan is developing into a major potential economic risk to the Asia-Pacific region, now that there is medical evidence of human-to-human transmission," said Mr Rajiv Biswas, Asia-Pacific Chief Economist for IHS Markit, in an e-mail statement.

"Since the 2003 Sars crisis, China’s international tourism has boomed, so the risks of a global Sars-like virus epidemic spreading globally have become even more severe."

China’s health commission has decided to include the coronavirus in the Class B infectious diseases category, which includes Sars, while taking preventive steps typically used for the most-serious ailments, such as cholera and plague, according to a notice posted on the website late on Monday.

Other countries are on alert, stepping up screening of incoming travellers. International airports in New York, Los Angeles and San Francisco started screening from late last Friday, joining cities in Asia that implemented surveillance measure days after the outbreak was reported on Dec 31.

In Singapore, temperature checks at Changi Airport will be expanded to cover all travellers flying in from China.

"From a public health point of view, both at a national and international level, you have to assume the worst-case scenario - so the Sars scenario - where you had cases going from Hong Kong to all over the world," said Dr Senanayake.

The WHO will convene a meeting of its emergency committee on Wednesday in Geneva, according to an e-mailed statement. Members will discuss "whether the outbreak constitutes a public health emergency of international concern, and what recommendations should be made to manage it".

So far, the WHO has not recommended trade or travel restrictions but such measures could be discussed at Wednesday’s emergency meeting.