WASHINGTON (REUTERS) - China is offering US President Donald Trump a package of trade concessions and increased purchases of American goods aimed at cutting the US trade deficit with China by up to US$200 billion (S$269 billion) a year, US officials familiar with the proposal said.

News of the offer came during the first of two days of US-China trade talks in Washington focused on resolving tariff threats between the world's two largest economies. But it was not immediately clear how the total value was determined.

One of the sources said US aircraft maker Boeing Co would be a major beneficiary of the Chinese offer if Trump were to accept it. Boeing is the largest US exporter and already sells about a quarter of its commercial aircraft to Chinese customers.

Another person familiar with the talks said the package may include some elimination of Chinese tariffs already in place on about US$4 billion worth of US farm products including fruit, nuts, pork, wine and sorghum.

A White House statement described the meetings as part of "ongoing trade discussions" and said Trump met with the Chinese delegation led by Vice-Premier Liu He and the US team led by Treasury Secretary Steven Mnuchin.

"The United States officials conveyed the President's clear goal for a fair trading relationship with China," the White House said.

The top-line number in the Chinese offer would largely match a request presented to Chinese officials two weeks ago by Trump administration officials in Beijing. 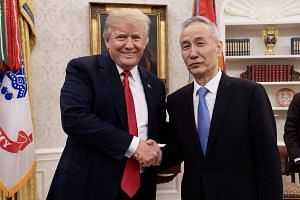 But getting to a US$200 billion reduction of the US China trade deficit on a sustainable basis would require a massive change in the composition of trade between the two countries, as the US goods deficit was US$375 billion last year.

The United States' two biggest exports to China were aircraft at US$16 billion last year, and soybeans, at US$12 billion.

Some China trade watchers expressed skepticism that such a US$200 billion reduction could be achieved quickly and said the offer may include repackaged commitments previously announced by China.

"That's an enormous number and it suggests that there could be some impressively ambitious accounting," said Scott Mulhauser, a former chief of staff at the US Embassy in Beijing and US Export-Import Bank official who now advises companies on trade issues.

Agreeing to a deal focused primarily on reducing the trade deficit could also weaken Trump's original tariff goal of pressuring China to end policies that his administration says are aimed at misappropriating US technology - a bigger structural change for China's state-driven economic model.

The US officials did not have details on China's demands in exchange for the concessions. The New York Times reported that China was asking Trump to set aside threats of tariffs on Chinese goods and US investment restrictions on Chinese companies.

The Times also reported that China wanted a relaxation of US export controls that ban American firms from selling certain high-technology products to China.

Earlier on Thursday, Trump criticised China as being "very spoiled" on trade with the United States, but said he was aiming for an overall deal with China.

Speaking to reporters at the White House, Trump said China had "ripped off" the United States for too long and that he told Chinese President Xi Jinping that "we just can't do that anymore."

Trump also said that possible modifications to crushing restrictions that have paralysed Chinese telecommunications equipment maker ZTE Corp could be part of a trade deal.

He said on Twitter on Sunday that he had ordered the US Commerce Department to put ZTE back in business.

He said that Xi had asked him to look into the matter and he agreed to do so, adding that ZTE bought a lot of components from US companies.

"Anything we do with ZTE, it's just a small component of the overall deal. I can only tell you this: We're going to come out fine with China. Hopefully, China will be happy, I think we'll be happy," Trump said.

Trump has threatened to impose up to US$150 billion in punitive tariffs to combat what he says is Beijing's misappropriation of US technology through joint venture requirements and other policies.

Beijing has threatened equal retaliation, including tariffs on some of its largest US imports, including aircraft, soybeans and autos.