WASHINGTON - US President Donald Trump on Thursday (March 22) announced his intent to impose up to US$60 billion (S$79 billion) worth of tariffs on China, sparking fears of a trade war.

Initiating the process, Mr Trump signed a directive for a Section 301 action on China. Section 301 authorises the President to take all appropriate action, including retaliation, to force a foreign government to change practices that the US deems unjustified, unreasonable, or discriminatory, and that burden or restrict US commerce.

In response, the Chinese embassy in Washington said in a statement: "China does not want a trade war with anyone. But China is not afraid of and will not recoil from a trade war.”

“If a tradewar were initiated by the US, China would fight to the end to defend its own legitimate interests with all necessary measures," said the statement sent to reporters.

China's Commerce Ministry on Friday unveiled plans to levy duties on up to US$3 billion of US imports in response to previously announced US steel and aluminium import tariffs, which will go into effect on Friday.

China was considering levying an additional 15 per cent tariff on US products including dried fruit, wine and steel pipes and an extra 25 per cent duty on pork products and recycled aluminium. The government has assembled a list of 128 US products in total that could be targeted if the two countries are unable to reach an agreement on trade issues, the ministry said.

“China doesn’t hope to be in a trade war, but is not afraid of engaging in one,” the commerce ministry said in a statement on Friday.  “China hopes the United States will pull back from the brink, make prudent decisions, and avoid dragging bilateral trade relations to a dangerous place."

Speaking at a press conference, Mr Trump said of the tariffs: “The word I want to use is reciprocal... If they charge us, we charge them the same thing.”

“We have a tremendous intellectual property theft situation going on which, likewise, is hundreds of billions of dollars and that’s on a yearly basis,” he said. 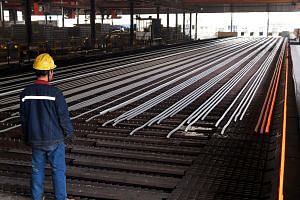 “We’ve spoken to China and we’re in the midst of a very large negotiation, we’ll see where it takes us,” he added. Mr Trump said his drive to reduce trade deficits globally would make the US a stronger and richer nation.

He has ordered the US Trade Representative (USTR) to publish in 15 days a list of Chinese products it intends to target with sanctions.

Senior administration officials who briefed journalists on Thursday said this will be followed by a 30-day period for public comment and consultations before tariffs are actually imposed.

An investigation last year by the United States under Section 301 of the 1974 Trade Act found evidence of China's use of state-funded entities to acquire American companies and American technology and coercion of American companies in China into joint ventures as minority partners.

It also found that American companies have been forced to hand over technology that Chinese companies then use to compete against the same US companies in China and globally.

The officials said the US is taking action after wide inter-agency consultations, against a backdrop of years of failed negotiations with China, and in line with casting China as a strategic competitor to the US in the President's National Security Strategy.

In the United States' new National Security Strategy issued last December, it was noted that "China engages in strategic economic aggression against the United States", said Dr Peter Navarro, director of the Office of Trade and Manufacturing.

"This was a seismic shift," he said on Thursday. Previous administrations and the Trump administration had "tried very, very hard to work with the Chinese.. and finally the President determined we need to move forward", he said.

Mr Everett Eissenstat, deputy director of the National Economic Council, said the report of the Section 301 investigation "clearly demonstrates that there are unfair practices by China in particular as relates to their efforts to acquire US technology and to favour Chinese companies over US companies".

China also supports and conducts "unauthorised intrusions into and theft from US computer networks and US companies", he said. "These findings are very well documented, the report is extremely solid and quite persuasive."

He has also asked the Treasury to propose executive actions to address concerns about unfair acquisitions in the US in industries for technologies deemed important to the United States.

Trump to slap more tariffs on China despite uproar

"The end objective of this is to get China to modify its unfair trading practices. It has been something that has been ongoing for quite some time and there has not been effective action," Mr Eissenstat said.

Meanwhile, US Trade Representative Robert Lighthizer said on Thursday that Europe, as well as six countries - Argentina, Australia, Brazil, Canada, Mexico and South Korea - will be exempt, at least temporarily, from hefty steel and aluminium tariffs.

He told a Senate panel that Mr Trump authorised a “pause” in the tariffs while talks are under way to find a more permanent solution, and that the US wanted to wrap up the discussion with countries over exemptions by the end of next month.

Mr Trump announced earlier this month he was imposing a 25 per cent tariff on imported steel and 10 per cent on aluminium.