Prosecutors identified two other men, Andrey Kukushkin and David Correia, as conspirators in an alleged scheme that aimed to funnel US$1 million (S$1.38 million) in donations to politicians and political candidates in Nevada, New York and other states to benefit a planned marijuana business funded by an unnamed Russian businessman.

Mr John Dowd, the lawyer for Parnas and Fruman, declined to comment on the charges. Parnas and Fruman made their initial court appearance in Alexandria, Virginia, with another court date set for next Thursday.

Details emerged about their backgrounds on Thursday.

Parnas, 47, who was born in Ukraine, is a businessman who divides his time between Florida and New York City.

He had garnered attention by becoming a mega-donor to Republican Party politicians. In May 2018, Parnas posted pictures on Facebook of himself and Fruman with Mr Trump in the White House and with the President's son Donald Trump Jr at a breakfast in Beverly Hills, California.

Parnas told NPR last month that he was "good friends" with Mr Giuliani and that they played golf together. 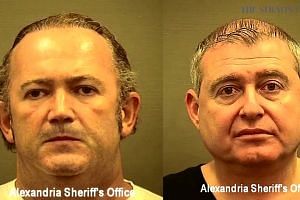 Parnas told Reuters in an interview last month that any violations of US Federal Election Commission rules were unwitting and a "clerical thing" because he was not an experienced political donor.

Fruman, 53, who is originally from Belarus, is a real estate investor who also runs a US import-export business.

Like Parnas, he had donated widely to pro-Trump politicians and helped Mr Giuliani with his efforts in Ukraine to discredit the Biden family.

Kukushkin, 46, is a Ukraine native now living in San Francisco and a veteran of the cannabis business.

He was a vice-president of a Russian hedge fund, Renaissance Investment Management, before getting into the business of growing and selling marijuana in the US, according to news reports, legal records and corporate records.

One report in Forbes Russia said Kukushkin started with investments in dispensaries in California and Nevada, and quoted him as saying he now made US$60 million in revenue annually.

Correia, 44, is the only one of the four defendants born in the US. He is businessman and a long-time associate of Parnas. Fraud Guarantee, a Florida-based fraud protection company, lists the two men as co-founders. Correia and Parnas also worked together on a failed movie-making venture that ended in litigation, according to US media reports.