Among his claims, Cohen said the Republican President directed "hush money" payments ahead of the 2016 US presidential election and that Mr Trump knew in advance that the WikiLeaks website planned to release hacked e-mails damaging to his Democratic opponent Hillary Clinton.

For decades, the US Justice Department has held the position that a sitting president cannot face criminal charges, though some lawyers disagree with that conclusion.

Under the US Constitution, a president can be impeached by Congress for "high crimes and misdemeanours" and removed from office. Mr Trump also could face criminal charges after leaving office.

Mr Trump and his supporters have called Cohen a liar trying to reduce his prison time after pleading guilty to a series of federal criminal charges.

Here is a look at some of Cohen's statements and whether they may implicate Mr Trump in criminal conduct.

Cohen's testimony and a cheque he provided to the House of Representatives Committee on Oversight and Reform that he said was personally signed by Mr Trump potentially could be used by prosecutors to build a campaign finance law violation case against the president, legal experts said.

Cohen said Mr Trump directed him to make a US$130,000 (S$175,000) "hush money" payment to adult film actress Stormy Daniels days before the election to cover up what she has called a sexual encounter with Mr Trump. 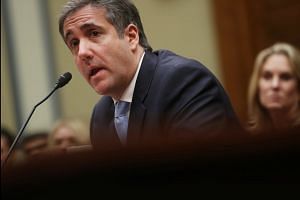 Mr Trump has denied the relationship and said the payment was made to stop her "false and extortionist accusations".

Cohen gave the committee a copy of two US$35,000 cheques issued in 2017, one that he said was signed by Mr Trump and the other signed by his son Donald Trump Jr to reimburse Cohen for paying off Ms Daniels.

Cohen pleaded guilty in August to campaign finance law violations for his role in orchestrating the secret "hush money" payments to Ms Daniels and a second woman, former Playboy model Karen McDougal, who also said she had a sexual relationship with Mr Trump.

Under federal law, individual campaign contributions cannot exceed US$2,700 per election and must be disclosed. Contributions are defined as payments intended to influence the election.

Mr Trump's lawyers have said the payment was not a campaign contribution because it was made to protect Mr Trump's reputation, not to influence the election.

Legal experts said Mr Trump would have a stronger defence if he could show he did not know he was breaking the law. While ignorance of the law is not usually an excuse, campaign finance laws are treated differently, said Professor Richard Hasen, who specialises in election law at the University of California, Irvine.

Cohen testified that, during the 2016 campaign, Mr Trump "made clear" to him that Cohen should lie and say negotiations to build a Trump tower in Moscow ended before the state-by-state Republican primaries began, when actually the talks continued for months after that.

Cohen pleaded guilty in August to lying to Congress in a 2017 statement in which he had said the talks ended in January 2016 instead of June 2016.

He said Mr Trump did not explicitly direct him to lie but looked him "in the eye" and relayed the false version of events.

"In his way, he was telling me to lie," Cohen said, adding that Mr Trump's personal lawyers "reviewed and edited my statement to Congress". It is a federal crime to "knowingly and wilfully" give false statements to Congress. It is also illegal to conspire with someone to provide false testimony.

"He is saying Trump made clear 'you should lie, and this is the story you should tell' - not in as many words, but in a manner that was clear to both of them," Mr Sklansky said.

If Mr Trump knew about and endorsed Russian efforts to hack Democratic National Committee e-mails embarrassing to Mrs Clinton that later were released by the WikiLeaks website, this could be used by prosecutors to build a conspiracy case against the President, legal experts said.

Mr Trump could also face liability under election laws if he solicited help from a foreign power, they said.

Cohen said Mr Trump knew from his longtime adviser Roger Stone there would be "a massive dump of e-mails that would damage Mrs Clinton's campaign" ahead of the election.

US intelligence agencies have said the e-mails were stolen as part of Russia's campaign of hacking and propaganda aimed at sowing discord in the US and boosting Mr Trump's candidacy. Russia has denied it and Mr Trump has denied collusion.

Stone has pleaded not guilty to charges brought by Special Counsel Robert Mueller that Stone lied to Congress about his knowledge of plans by WikiLeaks to release the hacked e-mails.

Prosecutors could look at whether Mr Trump violated federal election laws by soliciting a campaign contribution from a foreign national in relation to a June 2016 meeting between senior members of his campaign including Mr Donald Trump Jr and a Kremlin-linked Russian lawyer.

Cohen said he witnessed Mr Trump's son tell his father in a low voice "the meeting is all set". Cohen said he suspected this was in reference to the meeting with a group of Russians who had offered "dirt" about Mrs Clinton. Mr Trump has denied knowing about the meeting in advance but has defended it as a "totally legal" effort to gain a campaign edge.

Under US election law, presidential campaigns cannot accept or even "solicit" campaign contributions from foreign nationals. Opposition research on Mrs Clinton would qualify as a contribution, said Prof Jessica Levinson, who specialises in election law at Loyola Law School in Los Angeles.

"If he said, 'Take that meeting, I want dirt on Hillary', I think that could give rise to a federal election law violation," she said of the President.

Cohen testified that Mr Trump inflated his assets when it served him, including to the magazine Forbes, which tracks the wealth of the richest people in the US and the world, and deflated his assets to lower his real estate taxes. It is not a crime to lie to Forbes or the general public.

Cohen said Mr Trump inflated his assets to obtain a loan from Deutsche Bank. If true, this could violate federal law that bars lying on loan applications.

Prosecutors could look into whether Mr Trump's charitable foundation committed fraud related to the auctioning of a portrait of him.

Cohen accused Mr Trump of directing the Donald J. Trump Foundation to reimburse US$60,000 paid by a straw bidder to acquire the portrait. Mr Trump kept it for himself, Cohen said.

The New York Attorney General's office has said the foundation's use of funds for non-charitable purposes violates a number of state laws. The office sued Mr Trump and his adult children last June, alleging mismanagement of the foundation and misuse of its funds for political and personal purposes.

The foundation agreed in December to dissolve, in a partial settlement of the state lawsuit. New York Governor Andrew Cuomo has left the door open to eventual criminal charges.