SAN FRANCISCO (BLOOMBERG) - Now that he has declared a "national emergency," all that stands between President Donald Trump and the money he wants to pay for his promised border wall is the American judiciary.

And the Constitution. And the attorneys-general of California, Nevada, New Mexico and New York. And a vast array of land owners and local governments.

Opponents have lined up to block the President's declaration of an emergency to get funds for the wall that lawmakers have refused to give him and already has led to a damaging government shutdown that lasted more than a month.

Should a court consider the merits of the President's decision to invoke his presidential powers, Trump may not like the finding - there is little evidence of a crisis at the border that would be fixed by a multibillion-dollar barricade.

Yet Trump appears convinced that using his executive powers will allow him to reshuffle the budget to pay for the barrier after Congress didn't give him the funds he wanted. The President signed the declaration on Friday (Feb 15), as well as signing the latest spending Bill to prevent another government shutdown.

"The current situation at the southern border presents a border security and humanitarian crisis that threatens core national security interests and constitutes a national emergency," Trump said in the proclamation. 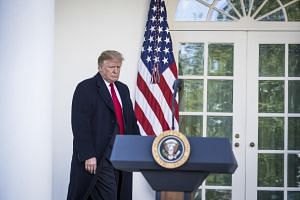 "The southern border is a major entry point for criminals, gang members, and illicit narcotics."

The decision is fraught with risk, according to Sam Berger, a vice-president for the Centre for American Progress. By Trump's logic, he's allowed to turn the military into a private construction company to further his anti-immigration agenda and campaign promises, Berger said.

"It's hard to imagine a more clearly illegal action by the president than this," Berger said. "He asked for the funds and didn't get them."

At a press conference in Washington on Friday, Trump said he was declaring the national emergency in part because he wants to build the wall sooner rather than later.

"I want to do it faster," Trump said. "I could do the wall over a longer period of time. I didn't need to do this."

Plaintiffs could support challenges to the President's declaration by using these very words against Trump as a sign there is no immediate emergency requiring circumvention of Congress, said Michael McConnell, director of the Constitutional Law Centre at Stanford Law School.

"His statement doesn't help him and may hurt him," McConnell said. "But there are also more objective factors to determine there is no emergency, like the fact that not much has changed in the last 20 years."

The President's declaration may trigger a slew of litigation in federal courts across the country, including the following challenges: Congress could sue, asserting its constitutional control over appropriations.

Democratic Speaker of the House Nancy Pelosi has already called Trump's manoeuvre "an end run" around lawmakers' power of the purse.

Local governments, along with landowners adjacent to the planned US-Mexico border wall, could also sue over the seizure of their land.

El Paso County in Texas, where Trump hosted a rally on Feb 10 to mobilise support for the wall, is already preparing such a complaint, according to the Protect Democracy Project.

California Attorney-General Xavier Becerra has vowed to sue if Trump uses his emergency powers for the wall; the A-Gs of Nevada and New Mexico have made similar statements.

If Trump plans to pay for construction by reallocating military funds, individuals or businesses who lose funding as a result of that decision could also sue.

Central to the arguments against the emergency declaration will be the separation-of-powers doctrine that affords Congress the right to allocate or not allocate money for certain discretionary programmes. 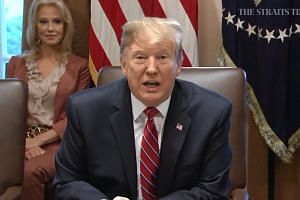 Trump edges towards taking a border deal to avert another shutdown

To defend his decision, Trump and his attorneys will have to unearth a statutory guideline that allows him to commandeer billions of dollars in taxpayer funding for his own project, said Elizabeth Goitein, co-director of the Liberty & National Security Programme at the Brennan Centre for Justice.

Or they'll have to prove the President has independent powers to assume such authority in an emergency.

"There are a lot of laws that make him very powerful," Goitein said. "There are definitely some very compelling arguments that none of the emergency powers available to him allow what he wants to do here."

"The truth is, no one knows exactly where the boundaries are," Vogel said.

In addition to court challenges, Trump's declaration is likely to be fought in the legislature, where it can be overridden by a two-thirds majority. That's unlikely with a Republican majority in the Senate and without a Democratic supermajority in the House.

Trump's exercise of the power in a matter of national security is on much more solid ground than then President Barack Obama's 2009 emergency to deal with swine flu, said John Eastmen, a constitutional law professor at Chapman University and former clerk to Supreme Court Justice Clarence Thomas.

Frustrated Trump says a wall 'is a WALL!'

"Those who claim that Trump is unconstitutionally bypassing Congress fail to appreciate that he is acting in full accord with powers Congress has previously delegated to the president -powers that every president since Carter has utilised," Eastmen said.

There aren't many legal determinations on the president's powers under the National Emergencies Act. One such case is a Korean War-era lawsuit dubbed the steel-seizure case, which addressed President Harry Truman's lack of authority to seize private property without the support of Congress.

In 1952, the Supreme Court determined that the president acts with his greatest authority when working in concert with Congress, and at his lowest when in conflict with Congress's "expressed wishes". That opinion has clear implications in the probable conflict ahead.

Legal arguments aside, the statistics Trump has cited to justify an emergency declaration include Immigration and Customs Enforcement's (ICE) arrests of hundreds of thousands of "aliens with criminal records" over the past two years.

ICE enforces immigration law within the US, not on the borders. Its numbers include people convicted of violent offences, but also those convicted of non-violent crimes including illegal entry or re-entry to the country.

Trump also calls the southern border "a pipeline for vast quantities of illegal drugs", suggesting a wall would stem the flow. In fact, most illegal drugs are smuggled into the country through ports of entry, according to the Drug Enforcement Agency and Department of Homeland Security.

Meantime, border crossings are a fraction of what they were some 20 years ago. Crime rates have fallen, and statistical evidence demonstrates that immigrants are less likely to commit crimes than the US-born population.

"Today's national emergency declaration so soon after Congress reached agreement on border security makes clear that the president is trying to create a crisis, not solve one," said Beth Werlin, executive director of the American Immigration Council.

"The most pressing immigration issue we confront at the border is one that the president himself has manufactured by unlawfully turning away asylum seekers and cruelly separating parents from their children."