WASHINGTON (NYTIMES) - The Trump administration considered severely penalising El Salvador this month for severing diplomatic ties with Taiwan, in a move that officials said was intended to signal a significant widening of the administration's pushback against China.

The effort ultimately fizzled over concerns that the penalties - eliminating some foreign aid and imposing visa restrictions on certain individuals - would have made El Salvador unwilling to help stop the flow of people illegally entering the United States.

The threat set off a furious internal debate between the White House and State Department, and pit US diplomats focused on China against those working on issues in the Western Hemisphere. It also displayed the administration's determination to challenge China beyond a growing trade war, even before it settles on a clear strategy.

At the United Nations last Tuesday (Sept 25), President Donald Trump announced that the State Department would undertake a thorough review of foreign aid, giving it only "to those who respect us and, frankly, are our friends".

He also cited "the encroachment of expansionist foreign powers" in the Western Hemisphere.

Beijing has been quietly carrying out a wide-ranging effort to vastly expand its trade and influence in Latin America, and in 2015, China surpassed the US to become South America's largest trading partner.

In a speech on the eve of a trip through Latin America and the Caribbean in February, then secretary of state Rex Tillerson warned about the dangers of the region's growing ties with China. 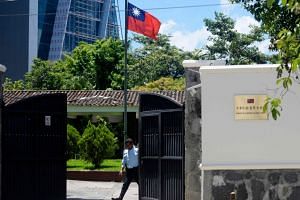 The proposed penalties were raised by the national security adviser, Mr John Bolton, three US officials said, after El Salvador established sovereign relations with China in August. It was the third Latin American country in the past year to do so; the Dominican Republic cut ties to Taiwan in May, and Panama did so in June 2017.

China insists that Taiwan is part of its territory. Currently, 17 nations have resisted recognising Beijing's diplomatic sovereignty, and China has been pushing harder against the last holdouts since Ms Tsai Ing-wen, a critic of Beijing, became president of Taiwan in 2016.

The White House wanted to push back.

In August, Mr Sánchez did it anyway.

In a blistering statement, the White House said Mr Sánchez's decision affected "the economic health and security of the entire Americas region".

"The El Salvadoran government's receptiveness to China's apparent interference in the domestic politics of a Western Hemisphere country is of grave concern to the United States, and will result in a re-evaluation of our relationship with El Salvador," the statement said.

That was followed by a threat from key Republican senators - Mr Marco Rubio of Florida and Mr Cory Gardner of Colorado - to push legislation to end foreign aid to El Salvador.

"Leftist leaders of #ElSalvador were clearly told ahead of time that switching from #Taiwan to #China would have negative impact on relations with US," Mr Rubio tweeted, "but they either didn't believe it or didn't care. They will soon find out that this @POTUS doesn't bluff."

But the State Department warned that such punitive measures would undercut a host of other administration priorities - including attempts to deter Central American migrants who have flooded the south-western border this year, seeking entry into the US.

Diplomats noted that the Dominican Republic and Panama had already recognised Beijing, with little pushback from Washington. Mr Trump had a warm meeting with President Juan Carlos Varela of Panama in June 2017 and had a hotel in Panama until partners evicted the Trump Organisation's management team.

State Department officials decided to call back the US chiefs of diplomatic missions from El Salvador, the Dominican Republic and Panama over the "recent decisions to no longer recognise Taiwan", Ms Heather Nauert, the department's spokesman, said in a statement this month.

But penalties were considered only against El Salvador, which received an estimated US$140 million (S$191 million) in US aid in 2017, including for narcotics controls, development and economic support.

The proposed penalties, which included cuts to financial aid and targeted visa restrictions, would have been painful for the Central American country and its high unemployment and murder rates.

As internal meetings progressed, North American and Central American officials postponed a high-level conference focused on security and economic prosperity to follow up a similar gathering in 2017 that was seen as a step forward in efforts to prevent migrants from heading to the US.

But by mid-September, top administration officials made clear that they wanted the conference to go forward, effectively ending any consideration of penalties for El Salvador. US Vice-President Mike Pence is slated to address the conference, scheduled for mid-October, in a signal of the import the administration places on the gathering, the diplomats said.

And the three US envoys quietly returned to El Salvador, Panama and the Dominican Republic with no new tough messages or punishments from Washington.