WASHINGTON (AFP) - Senator Amy Klobuchar on Sunday (Feb 10) officially joined a crowded field of Democrats vying to challenge President Donald Trump in 2020 - already shaping up to be one of the largest and most diverse ever.

And it is likely to grow before the US primary season gets underway a year from now.

Here are the first entrants in the presidential race, 21 months before the election.

The 58-year-old granddaughter of an iron miner, Ms Klobuchar is a former prosecutor with an unpretentious demeanor. She has quietly gained attention in Washington as a centrist. Ms Klobuchar is known for putting partisanship aside to pass legislation, something that has earned her a devoted following in Minnesota, and something American voters regularly tell pollsters they want.

Ms Klobuchar has promised more stringent gun laws and set a target of universal healthcare, while calling for America to support its troops, diplomats and intelligence officers.

But claims about her work ethic have cast a shadow over her goals. Several former aides have been quoted saying she is difficult to work for, with bouts of "explosive rage" leading to exceptionally high staff turnover. Her defenders say she is simply someone who demands excellence, and that the allegations against her would not be made against a man.

At 69, the US Senate's consumer protection champion from Massachusetts became the first high-profile Democrat to enter the race when she announced a presidential exploratory committee on Dec 31. She officially kicked off her White House run last Saturday. Ms Warren is on the party's left flank, and built her reputation by holding Wall Street accountable for its missteps. She is considered to have one of the best campaign organisations of any Democrat.

The 49-year-old US senator from New Jersey announced his candidacy on Feb 1, evoking the civil rights movement as he promised to work to bring together a divided America. Often compared to former president Barack Obama, Mr Booker began his career as a community activist and rose to prominence as mayor of Newark, New Jersey. He was elected to the US Senate in 2013, the first African-American senator ever from that state.

A talented orator with a flair for the dramatic, he drew attention for his performance during confirmation hearings of Trump Supreme Court nominee Brett Kavanaugh.

This New York senator made a name fighting the battle to end sexual assault, especially in the military, before the #MeToo movement gained national prominence.

The 52-year-old, a fierce Trump critic, is making gender and women's issues a hallmark of her campaign.

The barrier-breaking senator from California who aspires to be the nation's first black female president announced her candidacy on a day honoring slain civil rights icon Martin Luther King Jr.

The daughter of an Indian immigrant medical researcher mother and a Jamaican economist father, Ms Harris, 54, began her career as a district attorney in San Francisco before serving as California's attorney general.

A Cabinet member in the Obama era and grandson of a Mexican immigrant, Mr Castro announced his candidacy in English and Spanish on Jan 12 in the heat of the debate on immigration and border security.

At 44, the former mayor of San Antonio, Texas, hopes to become the nation's first Hispanic president.

At just 37, this congresswoman from Hawaii would be the first Hindu president if elected.

A supporter of liberal Bernie Sanders in the 2016 race, military veteran Gabbard was criticised for meeting Syrian leader Bashar al-Assad during that country's civil war, and for anti-gay positions that she has since retracted and apologised for.

A US Navy veteran who put his mayoral duties on hold to serve in Afghanistan, Mr Buttigieg would become the first openly gay nominee of any major party. 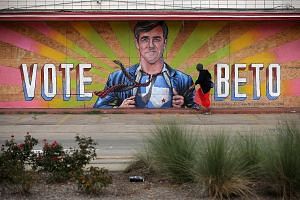 The secret to winning the 2020 US presidential race

Donald Trump intends to run for US president in 2020: Mail on Sunday

The 44-year-old tech entrepreneur launched his campaign with little fanfare in late 2017, warning against the dangers that automation presents to US workers.

He has advocated for a form of universal basic income as a way to reduce inequality.

An affluent Maryland businessman who served three terms in Congress, Mr Delaney was the earliest Democrat to officially launch a bid, back in July 2017. He has criss-crossed the early-voting state of Iowa seeking to boost his name recognition.

WAITING IN THE WINGS

Several big Democratic guns have yet to commit, including former vice-president Joe Biden and senators Bernie Sanders and Sherrod Brown.

Current and former governors are in the mix, too: Mr Jay Inslee of Washington, Mr John Hickenlooper of Colorado, Mr Steve Bullock of Montana and Mr Terry McAuliffe of Virginia.