NEW YORK (AFP) - Texas Democratic star Beto O'Rourke hinted Tuesday (Feb 5) that he will run for president in 2020, telling talk show queen Oprah Winfrey he will announce his decision in the coming weeks.

He acknowledged that he had been considering a run at the White House during a taping for Winfrey's "SuperSoul Conversations" series set to air next week.

Asked whether he has set a personal decision deadline, the former congressman said: "The serious answer is really soon, before the end of this month."

O'Rourke has laid low recently, but used Oprah's massive stage to re-emerge onto the political landscape as he considers a run for president.

"I'm in that process of thinking this through, talking to (his wife) Amy, listening to good friends and then hearing what you all have to say right now," he added, according to the Texas Tribune.

The 46-year-old would be entering a sprawling Democratic field that is expanding even one year before the first votes in the nominating process are cast.

Multiple senators are already in, including Kamala Harris, Kirsten Gillibrand and Cory Booker, while other heavy hitters like former vice president Joe Biden and Senator Bernie Sanders are mulling runs. 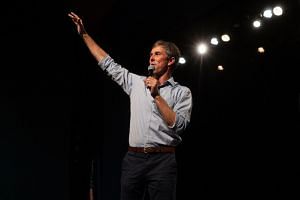 Thanks for sharing? US politicians' online tone seeks an authentic like

Beto ran an unconventional campaign, espousing progressive positions on immigration and health care, while traveling to every county in ruby red Texas in a bid to heal political divisions.

The campaign was time-consuming, and he signaled he has felt disconnected from family.

His disappointment about his narrow defeat has been on display over the past month. He embarked on a low-key road trip and blogged about the experience, writing on January 16 that he has been "in and out of a funk."