Mr Kim's lead negotiator, former spymaster Kim Yong Chol, is expected to carry a letter from the North Korean dictator to Mr Trump when he travels to Washington this week. He is expected to meet the President on Friday, in what would be a repeat of an unusual diplomatic move ahead of the first summit between the two leaders in June.

The administration has not announced the envoy's visit, which comes amid wrangling within the administration over terms for a second Trump-Kim meeting and the promised eradication of North Korea's nuclear weapons.

Mr Trump has been upbeat about a second round of face-to-face negotiations with Mr Kim, despite a lack of measurable progress toward disarmament.

"With North Korea, we have a very good dialogue," Mr Trump said on Jan 6. "I'm going to not go any further than that. I'm just going to say it's very special. And anybody else but me, you'd be in war right now."

If announced soon, the summit would likely take place in March or April, with Danang, Vietnam, appearing the most likely venue, according to people familiar with a flurry of diplomatic activity over the past month.

Mr Trump and Mr Kim have exchanged letters in recent weeks, two people briefed on aspects of the diplomacy said. 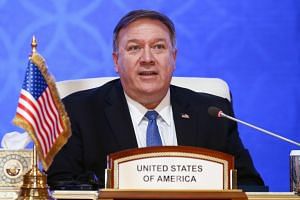 "We are working to make progress on our goal of achieving the final, fully verified denuclearisation of North Korea, and the President looks forward to meeting Chairman Kim again at their second summit at a place and time yet to be determined," said a White House spokesman who requested anonymity to discuss the ongoing negotiations.

Mr Kim Yong Chol, who is set to arrive on Thursday night, is also expected to meet with CIA director Gina Haspel, who has become more involved in matters related to Pyongyang's nuclear threat in recent months.

If the two sides make progress, US officials are hoping to establish the first working-level talks between America's special representative to the negotiations, Mr Stephen Biegun, and his North Korean counterpart, Vice-Foreign Minister Choi Sun-Hee.

North Korea has repeatedly given Mr Biegun the cold shoulder and denied meetings with him, but people familiar with the deliberations said the two could meet shortly in Western Europe if Mr Kim Yong Chol's visit goes well.

North Korea is believed to have solidified its negotiation strategy after meetings between Mr Kim Jong Un and Chinese President Xi Jinping in Beijing last week.

Mr Biegun did not respond to a request for comment.

North Korea remains under heavy US sanctions, including limits on travel, so Mr Kim Yong Chol's trip could take place only with high-level approval.

His role showcases the unorthodox way that Mr Trump has dispensed with protocol and the usual step-by-step diplomacy, in which high-level meetings are a reward for specific action.

Mr Kim Yong Chol abruptly cancelled a planned meeting with US Secretary of State Mike Pompeo in November, appearing to derail a presidential summit amid disagreements over what North Korea would agree to give up and whether the US would offer additional incentives.

Mr Pompeo is expected to meet the North Korean official on this visit, but it's clear that North Korea's goal is to speak directly with Mr Trump, said diplomats and others who follow the rogue regime closely.

"I think the North Koreans have come to the conclusion that the only one they can deal with is Trump," said Mr Ken Gause, a North Korea expert at the Centre for Naval Analysis. "They believe this is a leader-to-leader relationship, and the only reason that they would be meeting with Pompeo or even Biegun is to set up logistics."

A flowery letter from Mr Kim Jong Un, hand-delivered to Mr Trump by Mr Kim Yong Chol in June, is widely credited with Mr Trump's decision to reinstate the first summit in Singapore, after the US President had cancelled it in protest of what he called hostile North Korean rhetoric.

Mr Trump has credited his personal outreach to Mr Kim Jong Un for a lull of more than a year in North Korean missile and nuclear testing, and he is sensitive to criticism and news coverage that question whether he was naive.

"Different parts of the administration have different views on the path forward," a person familiar with the deliberations said.

Mr Bolton and others have argued for maintaining the hard line articulated last year - the complete, verifiable, irreversible denuclearisation of the Korean peninsula, that person said.

But US officials have used that language less frequently lately, which some Korea watchers take as a sign that the ground may be shifting towards a US concession with the goal of reaching a deal that Mr Trump sees as otherwise impossible.

"There needs to be a starting point for both sides, where both sides get a clear win," the person familiar with the deliberations said.

The administration is debating whether to engage in what many North Korea hawks see as a risky business of offering the regime relief from sanctions or other incentives up front, diplomats and other officials said.

"Basically the US position is gravitating toward the North Korea position, which has always been for a phased, reciprocal process that does not involve giving up the nuclear capability on the front end," Mr Gause said. "The North Koreans are not going to give up something for nothing."

Mr Daryl Kimball, executive director of the Arms Control Association, said the US is likely to soon announce that the annual joint military exercises with South Korea have again been scaled back, a move that Mr Mattis had opposed. The exercises are also likely to be renamed.

He added that one possible North Korean move would be to decommission the Yongbyon nuclear plant to show it is making concessions.

Mr Kim Yong Chol's visit will likely not be a negotiating sessions but a necessary step "to discuss and agree on a second summit date, a venue, and maybe broad outlines of what corresponding steps the US may be prepared to take".