The Yomiuri Shimbun reported that North Korea appears to review the US proposal but has not yet give a response, citing officials familiar with the matter.

The report comes amid rising speculation that the two leaders are soon to hold the second summit to resume the stalled talks on denuclearisation, following their first meeting in Singapore in June last year.

Mr Trump had previously confirmed that talks on the location of the second summit with Mr Kim were underway and that they are to announce it in "not-too-distant future".

Mr Kim, in his New Year's speech, had also expressed his willingness to meet Mr Trump again "at any time".

For the second meeting, Vietnam, Singapore and Hawaii had been mentioned as possible venues for the bilateral summit. But experts thought Vietnam and Singapore held higher possibilities, as they have North Korean embassies, while Hawaii does not.

Vietnam reportedly has delivered messages to both South and North Korea that it wishes to host the envisioned summit in its resort town of Danang. 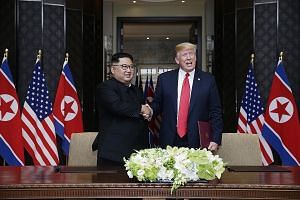 Former officials of the US government that worked on the North Korean issue have also expected the second US-North Korea summit to happen soon, but they also expressed doubts on whether the two would be able to reach an agreement.

The nuclear talks has failed to advance after the first summit last year, due to the differences of their stance on denuclearisation. While the US insists that North Korea takes more concrete action towards denuclearisation and submits a list of its nuclear weapons, Pyongyang demands a reciprocal gestures, such as easing economic sanctions.

In an interview with Radio Free Asia (RFA), a US news outlet, last Friday, former US nuclear negotiator with North Korea, Mr Robert Gallucci, said the second summit is likely to take place at the end of this month or next.

Another former US envoy expressed scepticism as to whether progress would come from the envisioned summit.

"The two leaders of the United States and North Korea will shake hands, have dinner banquets and hold a summit like they did in the Singapore summit," Mr Robert King, the US former special envoy for North Korean Human Rights Issues told RFA. But a practical outcome is not expected, he added.

US Secretary of State Mike Pompeo reiterated their stance on a "full and final" denuclearisation while expressing hope that the US and North Korea make substantial progress this year.

"Reducing the threat from North Korea, whether that's by our success to date in stopping their missile testing, stopping their nuclear testing, those are the important elements. We've got to get to full and final denuclearisation," he said in an interview with Fox News last Friday.

"I don't think there has been a single variant from the core proposition, which is the fully denuclearised North Korea as verified by international experts, (which) is the objective of this administration. We intend to achieve that," said Mr Pompeo.